The Minecraft Nether Update has added a new enchantment called Soul Speed. A lot of people are wondering how this works exactly, as it is able to be a bit complicated at first. The short of it is that the enchantment speeds players up when walking on either Soul Sand or Soul Soil.

Unlike the other enchantments in the game named Minecraft, however, players are not allowed to obtain this on boots by simply using an enchantment table. Instead, they will have to trade the gold ingots with Piglins in order to get a hold of pre-enchanted boots or a book with the enchantment on it. 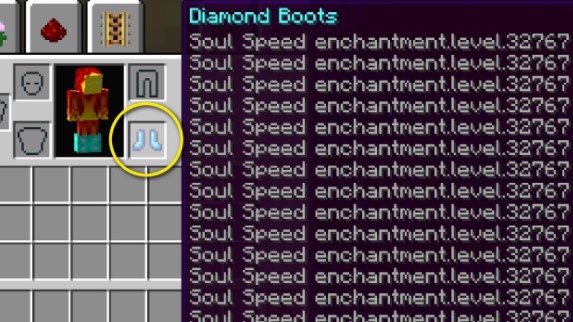 For your information, enchanted books with the Soul Speed enchantment are also able to be found from chests in Bastion Remnants, but they are currently the only way of obtaining the enchantment. Players want to know exactly how the boots work should read on, as there are a few things worth noting before enchanting away.

The formula used to determine the speed increase of the player is 0.9 (Soul Speed Level) * 0.125. essentially, if you want to figure out just how much faster you will be, you have to multiply your Soul Speed Level by 0.125 (or divide it by 8) and then add 0.9. It is important to follow the order of operations and multiply before adding or else the formula will not work, meaning that Soul Speed I make you move 2.5% faster, Soul Speed II makes you move 15% faster, and Soul Speed III makes you move 27.5% faster. Keep in mind that the bonus only applies when moving on Soul Sand or Soul Soil, and it negates the movement penalty applied by Soul Sand so you will move the same speed on both surfaces.

You are making use of Soul Speed for faster overworld travel should be weary that the enchantment does degrade the boots of the wearer. Albeit at a minimal rate. Every time you step on one of these two blocks, there is 4% chance that the boots will lose durability. Aside from that, taking damage or falling will also still damage the boots, so despite this seemingly relatively low, Soul Speed boots are able to break faster than one might think.

The enchantment called Soul Speed has a host of uses, and for reference, a 27.5% increase to movement is more than a Potion of Swiftness grants, making this no joke. You will certainly want to be cautious about breaking the boots, but the Unbreaking and Mending enchantments both do wonders to counteract the steady degradation caused by Soul Speed.

In conclusion, Soul Speed allows you to walk at increased speed over both Soul Sand and Soul Soil when it is applied to boots. There is a small chance your boots will lose durability with every Soul Soil or Soul Sand you walk on when wearing the enchanted boots, meaning you will have to keep yourself supplied with Soul Speed enchantments.