Skip to content
Homepage / Reviews / What Are the Best Trident Enchants

Enchants or enchantments refer to special bonuses or assets that are able to be applied to armor, tools, or weapons like trident through the use of an enchantment table, or an anvil if you have enchanted books. For those who have no idea about this kind of book, it is able to be acquired via trading, fishing, finding them in the generated structures, or by placing a book in an Enchantment Table.

This Minecraft best enchantment guide features all of the top options for enchanting your trident. If you are looking to get the most out of your trident enchantment in the game, then here is the information that you will need. 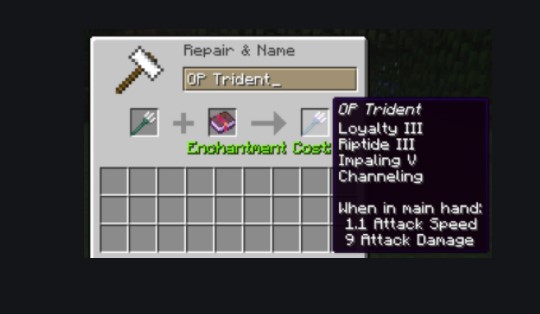 You will need quite a bit of experience and levels if you want to enchant your gear to its fullest potential. As a bit of a tip for this, you are able to disenchant some gear and items that you may have lying around in the Grindstone. This one is a useful method to quickly earn some early levels if you are just trying to finish up with some gear. It is such a good method if you have got a Monster grinder or you got a few kinds of AFK fishing system going and you have a lot of extra enchanted fishing poles and books.

Impaling V is only useful if you are fighting aquatic mobs a lot. If now, then you might as well not bother with it because it does not increase the damage against the land monsters.

Loyalty III is probably the best overall enchantment for the trident. When you throw your trident, this one will automatically bring it back to you. Basically, the higher the level you have on it, the faster it will return to you.

Channeling has a few niche uses but it is also very cool. What it does, is that when you hit a mob with your trident during a thunderstorm, it will strike down a lightning bolt onto the monster. This one is useful for making charged creepers, which are able to help you farm mob heads, if you are into that sort of thing.

Unbreaking III can reduce the likelihood of your item having its durability reduced when used.

Mending fixes your item if it has had its durability reduced when you collect Experience Orbs.

In the game called Minecraft, a trident is known as a weapon used in both melee and ranged combat. This one is a rare drop from drowning. It cannot be crafted. The weapon must be picked up as a drop from a killed drowned.

Which enchantment do you think is the best for trident? Share your thoughts on the community.