Vaporwave Minecraft is the name of the second PvP texture pack by ErikoGamerYT for both obsolete and newest versions of Minecraft Pocket Edition. The previous one was named Aya Resource Pack, which has much in common with the pack of today. This time, the blue and the violet colors prevail, which is really reminiscent of the synthwave style. In the dark, all the things look pretty, and if you are somewhere near the clouds, you will have a view of the incredible sky.

In general, the Vaporwave Minecraft resource pack was created for a certain mode where players fight each other. The thing called BedWars is probably the perfect fit, but due to its realism, this one is able to be used by you anywhere including the normal survival. 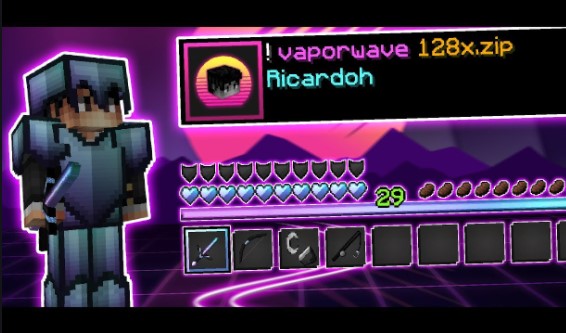 Apparently, resource packs load their assets based on the order of the packs on the list. The bottom-most pack is the one that loads first, then every pack placed above it replaces assets of the same name with its assets.

The old textures (pre 1.14) are available in a resource pack named Programmer Art. However, this one is not available by default in 1.16.