There are a lot of successful Youtubers. Nathan or known as UnspeakableGaming is one of them. For Minecraft players, they may be already familiar with him because playing Minecraft is one of his content on his Youtube channel. As a popular Youtuber and Minecraft player, a lot of things that people want to know about him including about his Minecraft server IP.

Talk about Minecraft server IP of Nathan, actually he has had a couple of servers. He has the newest server and the server is ChaseCraft. The IP of this server is play.chasecraft.gg. It is important for you to know that his past servers have shut down or are being fixed from griefing. 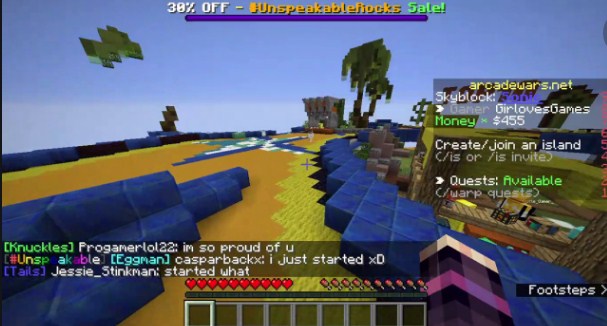 His last server was play.legacymc.org and it was griefed by a mod. But then, it was fixed shortly after. But, the server got destroyed later and all was left was bedrock. (IPlayMinecwaft) His server before that (SquadMC) has been shut down permanently. He also has a server named CrazyWars and the IP is mc.crazywars.net. This server is still active until now. However, it has a little number of players. It is able to reach from 10 to 100 a day and this number is very small for a server of a popular Youtuber. This server IP was announced by him on his Twitter account @UnspeakableGame on August 31st, 2017.

On his Youtube channel, Nathan usually uploads about him who showcases maps, playing with friends, doing some challenges and games like Do not Laugh challenges, Hide N’ Seeks, playing Minecraft with fans on a server and many more. He is one of The Squad member and his fellow friends in this squad are MooseCraft and Shark. However, he and Moosecraft were members of the group named Proper Productions which owns 3 channels including ProperIdiots, ProperDummies, and Proper Life.

There are a number of popular Youtubers who become his friends including FavreMySabre, MooseCraft, Shark, ASWDFZXCVBHGTYYN, CyclonePlays, Preston, Logdotzip, and SGC Barbarian. Nathan also collaborates with Youtuber and Minecraft Map Maker Euclides on his videos and they do it by reviewing maps that he has created for him.

Before he plays Minecraft, long time ago, he played GameBoy. He played games such as Pokemon on his GameBoy and on hi Nintendo DS. Also, he liked playing with Nerfguns and make massive Lego builds. Then, he got a recorder in which he made a lot of videos about Lego. However, he never uploaded them to Youtube. Then, when he was 13 years old, he created a video with his friends and then found Youtube. In 2012, he created his first channel and that is how he began his Youtube career.

There are some Youtube channels that he created including UnspeakableGaming, UnspeakablePlays, Unspeakable, ASWDFZXCVBHGTYYN, and Unspeakable Clothing. If you are curious what videos on each channel of Nathan, you are able to access it.