Thaumcraft is the name of a mod that adds a lot of magical arcane blocks and items into your game. In this mod, you are able to use magic to kill mobs and get items. There are new Biomes such as the Tainted Biomes. It adds a new dimension called Eldrich. Eldritch can be described as a labyrinth full of tainted mobs and Boss.

One of the items is called a wand. Wands refer to the most basic magical tool of Thaumcraft, which gather and store vis and use it for various purposes, mainly crafting at the Arcane Crafting table, producing magical builds, and particular invocations such as triggering an Arcane Infusion. The simplest way to gather vis is to drain it from a node, but with basic (wooden or iron) wands, or without having mastered key research topics, the player has to take care not to drain nodes completely lest they be damaged or destroyed. 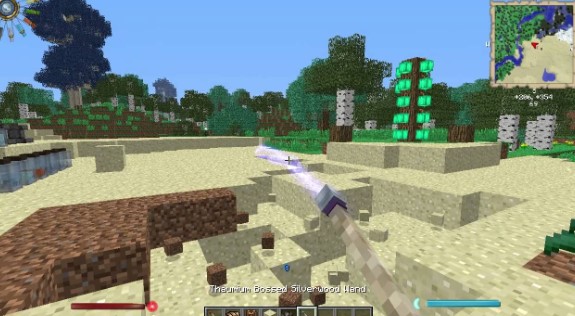 Every wand consists of a wand core and two metallic caps. Aside from that, they are also able to be equipped with various foci providing spells to cast. The normal progression is from an iron-capped wooden wand (your first wand that needs only a vanilla crafting table), to a gold-capped greatwood wand (needing the Arcane Crafting Table), and on to a thaumium-capped Silverwood wand (needing the Infusion Altar and scarce essential). In addition, there are also a few elements cored, available each providing regeneration of an aspect. Please take note that the last binding of charged thaumium caps to a Silverwood core is done at the Arcane Crafting Table, but it takes somewhat more vis than a gold-capped greatwood wand can hold.

If you want to accomplish this crafting for the first time, there are two main options. Traditionally, you are able to get vis discounts by wearing appropriate equipment, which will bring you below the limit. The second option is to craft a greatwood or gold scepter, which holds enough vis to handle the binding.

Wand Cores are known as the stick part of a wand. The things determine the vis carrying capacity of the wand they used in. they are able to be made of several different kinds of wood or other materials. Please take a note that without attached wand caps, even the most magical wand code is just a stick.

Wand Caps are the name of one of the two main components of making wands and the other being the one core. Each of them starts with 5 nuggets of some metal, crafted in the helmet arrangement. However, the advanced ones need progressively more complex magic to complete them, and the more advanced the caps, the more expensive it is to attach them to a wand.

The newbies would be frustrated with the little amount of uses they get from their wands. Using them for crafting and building is great but where are all the wands that can zap? For that, you will have to get hold of some Nether materials to craft your very first wand foci.