Well, according to the FTB Gamepedia Wiki, modpacks are actually short for mod packages or modification packages. These are packages of mods. Now, there are more than 15k modpacks which are available for Minecraft and all of them are in various themes. All modpacks virtually use mods which are created for the Java Edition. 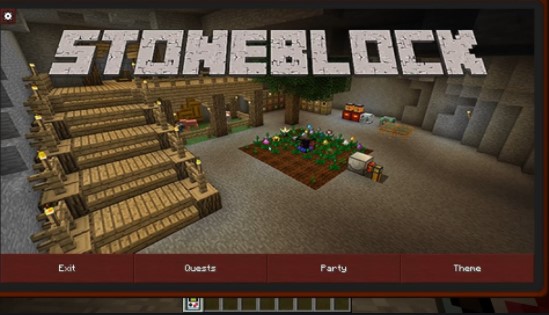 Why do modpacks exist? Modpacks exist because of how complex configuring mods to work together. Technic was one of the first earliest modpacks which was released in Beta 1.7. Then, it became very popular after being spotlighted by The Yogscast. So, it inspired further modpacks as well as the Technic Launcher.

Now, what is StoneBlock Modpack 1.12.2? It is a kind of SkyBlock, except you do not begin with a tree and you are surrounded by stone. It is a kitchen-sink modpack with a lot of quests to help you to guide in the beginning and to give players goals to reach. It is important for you to know that it is not a lightweight pack. It needs at least 5 to 6 GB of Ram allocated to the pack and a decent CPU.

This modpack is for Minecraft and was uploaded by Kaspar.  It is important for you to note that you have to choose the world type “Void? World” in single-player, or “voidworld” on servers.

If something about the quests or quests rewards is mentioned in the update log, do “/bq_admin default load” and “/bqs_loot default load” to update your questbook.

If you want to disable the “Create an Island” Banner, you have to go to main/pause menu->mod options->void island control->config->othersettings->hideToasts.

There are some changelogs of Stoneblock 1.12.2. Here they are.

Some Draconic Evolution quests are fixed.

In the recipe, made Stone Gear for Tin and Bronze gear OreDict.

If you access CurseForge site, you are able to see that StoneBlock modpacks has been downloaded more than 2 million times. When this article was being created, this modpacks were last updated on July 28th, 2020.