First, let’s find out about Spigot. It is the most popular used Minecraft server software in the world. It is a modified version of CraftBukkit with a lot of improvements and optimizations that can only make CraftBukkit shrink in shame. If you want to get it legally, it will require the SpigotMC BuildTools. There are more than 150 improvements present only in Spigot. Those include BungeeCord support; configuration of many internal server values such as crop growth rates, entity tracking, map seeds; further configuration to heavy elements such as entity activation and hoppers; enhanced watchdog and timings profiling to be able to catch plugin issues; rewritten chunk loading, unloading and saving; and some useful API additions for developers. 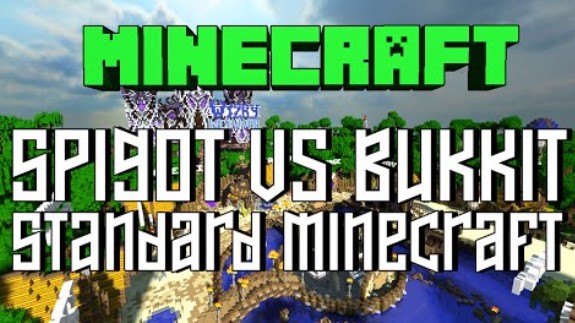 If you want to use it, there are some prerequisites that you are able to see in the list below.

Now, how about Bukkit? It is an Application Programming Interface (API) which provides third party developers with the ability to add their own code to Minecraft through the use of plugins. It has completely changed how Minecraft servers are managed and also has exponentially expanded their capabilities.

If you access dev.bukkit.org, you are able to see that Bukkit is a free, open source, software that provides the means to be able to extend the popular Minecraft multiplayer server. The aim of it is to be able to provide the Minecraft community with a powerful, well-designed and thought out solution to extending and controlling their servers.

You may know that creating the dream Minecraft server you have always wanted has never been easier. However, Bukkit will provide you with the tools which are important to completely shape your server exactly how you like.Also, it makes you easy to maintain it through the use of a built in plugin install, uninstall and updating system as well. It will not be like other mods, Bukkit will not force any functionality on you that is not absolutely necessary to run a Minecraft server. This results in less bloat and, as a result, better performance. With a click of a button or the entering of a command, you are able to have a plugin installed onto your server with ease.

Well, that’s all the information that we are able to give to you about Spigot and Bukkit. We hope that it can help you in knowing about these things especially for you who play Minecraft.