SCP Site 19 2004 is known as the name of a roleplay map ambiented in the SCP Foundation universe and intended for multiplayer, but you are also able to use it to play alone. This one is very big and includes almost all the rooms found in SCP – Containment Breach, other extra rooms added and a full exterior.

SCP Site 19 2004 is a roleplay intended recreation of the facility from SCP Containment Breach, but the creator added some extra rooms, a full exterior, a lot of redstone, a working Tesla gate system, a working site lockdown system, and most importantly, a working warhead system, which is activated will blow up the entire facility. Aside from that, it also has working redstone SCP-294 (only works with Quarters from the 2004-SCP Addon resource pack), and SCP-914 (only works with Keycards and SCP-500 from the 2004-SCP Addon resource pack, and only one of item at a time). 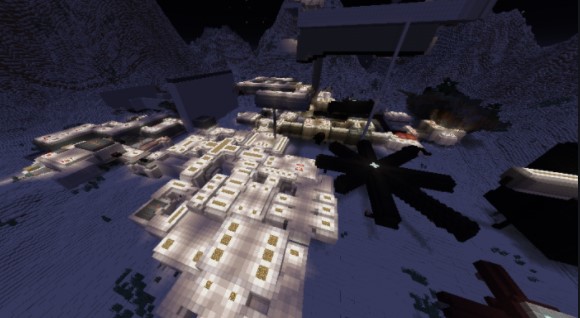 There are some important things that you have to take note. First, you must have 2004-SCP Addon enabled and with both its resource and behavior packs put over each other addon’s resources and behavior you may use with this map. Second, most of the redstone was designed by The Bow Tie Man, including the piston doors and the working conference room, but CooblestoneAndDirt designed the mechanism for the lockrooms. Third, you are recommended using the following along this map: 2004-SCP Skin Pack, SCP Vehicles Addon, SCP JS Edition, and SCP Foundation Add-on. You are able to use the computers and chairs from those addons in order to decorate the map.

After you have downloaded the SCP Site 19 2004 or Site 19 Map Minecraft Xbox, you can just click the .mcworld file and the map will import to your Minecraft. If it does not work, then you need to rename the file from .mcworld to .zip, decompress it and move the folder to games – com.mojang – MinecraftWorlds.