Did you think there will never be a similar remake of SCP Containment Breach Minecraft Map on Minecraft Bedrock? If the answer to the question is yes, then you are wrong. This one is a discontinued map created using only vanilla commands and redstone, with the resource pack of the creator (with only sounds and textures).

Apparently, a new map is being developed, with the improvements in each aspect. This one is a recreation of SCP Containment Breach map seed 9zkmiqf. Since this map is a discontinued map, you are asked to not report the bugs. There are a few new areas which do not work properly or at all. 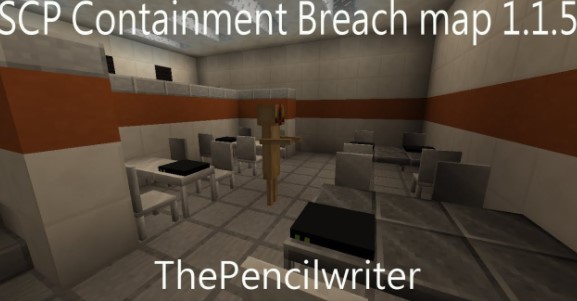 Please take a note that you must re-download the map in order to reset it.

You are not allowed to re-upload SCP Containment Breach Minecraft Map anywhere else. You may use this one for anything you want such as recording videos, adapting it, and so on, but you must credit the creator and put a link to his Youtube channel. SCP Containment Breach Minecraft Map is being completely re-made, the creator hopes all the content stealing will stop, and that people actually give the appropriate credit. If it does not, the creator will not release anything.

There are some precautions when playing SCP Containment Breach Minecraft Map. First, right clicking or pressing directly in front of you may place the item you are holding onto an invisible armor stand used for SCP-173’s look detection. This one only activates when near SCP-173. Second, do not throw blinks, save, or save and quit too close to a wall, they will not work.

The creator has discontinued this map quite a while ago, but he has decided to just release the version he had before he discontinues it. A new one is being developed by a team he has created called Scizzor Studios.

In order to install it, the first thing that you have to do is to click one of the links provided in the site named MCPEDL. After you have downloaded the .mcworld file, please open it with Minecraft. You do not have to access any Minecraft folders as Minecraft will automatically import the .mcworld file. You need to check out the tutorials of MCPEDL for the specifics.