You already know that there are tons of objects that you can craft using certain material in a recipe. Of course, you can find different recipes to make different objects too. But, you by chance will also use the same material in a certain recipe to make an object.

So, what is the recipe that you will need to craft Respawn Anchor? 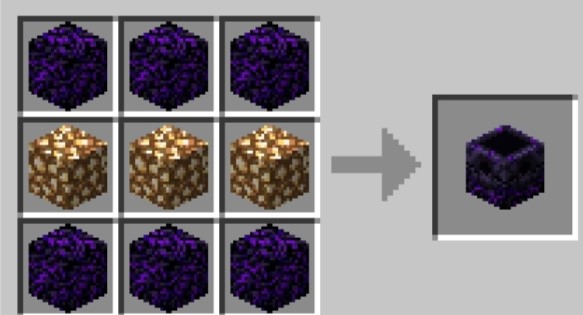 You may be interested to craft the Respawn Anchor in which it will allow the players to set their spawn point in the Nether. This is a new additional block added to Minecraft. So, if you are really interested to craft Respwan Anchor, here, we give you the recipe to make it in the below!

The Recipe of Crafting Respawn Anchor

To craft Respawn Anchor, the players will need:

When the players have three main materials, of course, they can craft it soon.

To craft the Respawn Anchor, you have to place 3 blocks of crying obsidian of 3*3 crafting grid.

You should place 3 blocks of glowstone of 3*3 crafting grid.

In this row, you need to place 3 blocks of crying obsidian of 3*3 crafting grid.

Well, you can totally craft the Respawn Anchor in Minecraft by placing blocks that you can do in the format above.

Moreover, the Respawn anchors can be obtained by using any pickaxe or diamond tier. Then, in Bedrock Edition, the Silk Touch enchant can run on a Respawn Anchor.

As the purpose of the Respawn Anchor, it can be used to respawn the player in the Nether even if the player leaves the Nether.

After that, when the Glowstone blocks are charged, it automatically can be used to set the player’s spawn. Of course, each time the players die, absolutely they will respawn next to the anchor.

But, if the players’ respawn anchor is destroyed by other players or has been exhausted or the area is not suitable to respawn, of course there is a message that says “You have no home bed or charged respawn anchor, or it was obstructed”.

Then, if you get it, what can you do? Of course, you can respawn at the world spawn point and return through an end portal as a respawn. Then, this way totally depletes a charge at all.