Greenfield map 1.12.2 or 1.11.2 for Minecraft is the name of a city map made by TheJestr. The city named Greenfield is a city like no other. Aside from built to the finest detail, it also on a carefully planned large scale. It is build using a 1:1 scale (one block equals one cubic meter) and is created to feel you are walking around a real city whilst you are exploring it.

Greenfield began back in August 2011 and is still being worked on to this day to bring new updates and new areas to explore. The things that you are able to discover in Greenfield are the same as any large real life city. You will be able to find a downtown area with nice rich suburbs, skyscrapers, poor decaying ghettos, industrial areas, as well as a vast network of roads, railways, subways. And highways. In addition, the map is also littered with secrets and Easter eggs for you to find if you look hard enough. Please take a note to not to play any other version of it may not work. You are suggested to use Shaders mod for the best experience. 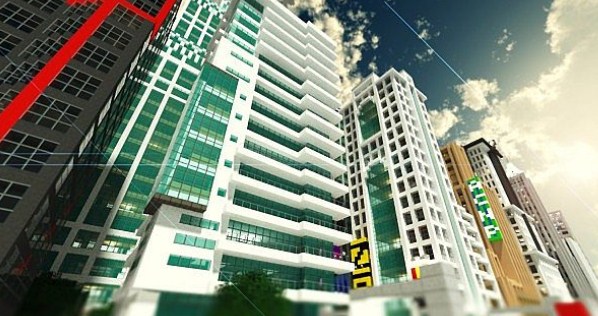 Now, the Greenfield v0.5.2 is up for download. The new update called Greenfield v0.5.2 brings a massive focus on industry and provides new places with a lot of factories, ports, city utilities and housing for the masses of blue collar workers. This one adds two new large areas to Greenfield, with the addition of rebuilding the old area called Olympia.

Westwood is the heart of working class. The fact that it is low land value and high crime rates make it as an affordable place to live. when you have a big family to feed and a very low income, it is the perfect place for you. It features all of the discount stores any low paying job family could dream of. However, you will not want to walk around here alone after dark.

The Port of Greenfield  is wonderful. The amazing 1950s development that helped transform Greenfield into an industrial hub during the 60s and 70s still thrives until now, at the expense of mass abandonment of many older posts of Greenfields. This one features many shipping docks, as well as the regions top cruise ship terminal. Near the area, you will also able to find the biggest oil fueled power plant on the west coast.