The thing called Mystical Agriculture can be described as a mod that was created by BlakeBr0. This one allows you to grow crops for resources as an alternative to quarries and mob farms. It is a spiritual successor to Magical Crops by Mark71. 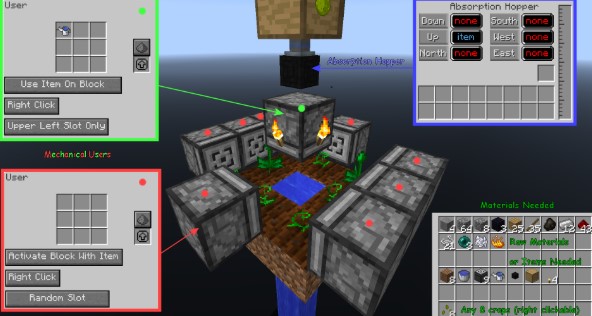 Aside from that, it also adds five new sets of armor and tools, and a handful of utility items. In addition to vanilla resources, a lot of modded resources are supported, including Twilight Forest, Botania, Mekanism, and Thermal Expansion. This mod also adds a crafting item named Infusion Altar to make mystic seeds. For those who are not familiar, Infusion Altar is the multiblock structure that is used to craft Thaumic items. This one is the next tier of Thaumcraft crafting that is used to create more advanced items such as the Portable Hole or the Wand of Fire.

For Minecraft 1.12, Mystical Agriculture Growth Accelerator scans a single column from 1 to 64 blocks above themselves looking for growables. They affect multiple plants in a column and multiple growth accelerators are able to affect the same plant. Because of this, a column of 63 growth accelerators is able to affect a single plant (64 minus one due to the soil block). Plots are able to be stacked vertically in order to enable multiple plants getting the effect of multiple accelerators though there are diminishing returns due to the reach of the accelerator.

For the later versions of Minecraft, growth accelerators have tiers and every of them has a different reach, starting at 12 for inferium (tier 1) and increasing by 12 every tier until reaching 60 with supremium (tier 5).