Are Playstation Move Controllers supported? For your information, PlayStation Move controllers are not supported and a DUALSHOCK®4 Wireless Controller is used to play. Let us find some information related to Minecraft VR PS4 here.

Right now, Minecraft PS4 VR update is available to download. Developer Mojang Studios announced the update earlier this month but had not previously said when it will be playable. If you own Minecraft on PlayStation, so you are able to update it. The update is completely free. 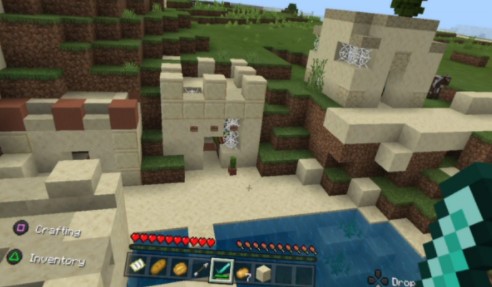 The update does what it says on the tin, creating Minecraft playable on Sony’s PlayStation VR platform. Actually, it is not the first time Minecraft has come to the virtual reality. But, this is a welcome addition to the roster given the size of PS VR’s install base. Of course, you are going to need a PlayStation VR headset and a console to play. As Mojang said earlier this month, there are no changes to the game for virtual reality beyond several basic interface tweaks. Everything else remains exactly the same, with the players using the PS4 controller to move about the virtual world.

Apparently, the game is 100 percent the same Minecraft game that you are able to play every day, every week, every month, every year. Nothing removed. 100 percent wholesome and pure full-fat Minecraft. Minecraft has always been a fantastic title to just lose yourself in, and the immersion of virtual reality may deepen the experience.

Finally you are able to experience Minecraft in VR in all its blocky goodness. If you have already own Minecraft on the system, just ensure the game is updated and now it should have PSVR support. If you do not already own Minecraft on PS4 but you are interested in playing on PSVR, all you need to purchase is the standard version of the game. It is not a separate purchase or store listing for the PSVR version.

Even though being one of the most successful games of all time, Minecraft has had an interesting relationship with VR. We get information that the game launched on Gear VR and Oculus Rift a few years back, but since then there has been little talk of expanding that support to other VR systems. PSVR and Oculus are two of the largest headsets on the market at the moment, and up until now neither had a Minecraft VR version.

With PSVR support implemented now, There are lots of fans probably have renewed hope for an Oculus Quest port. But, a few days after PSVR support was confirmed, a Minecraft developer commented that there was no news on Quest support and that it will require a rework of the way the game handles VR locomotion to support full room scale on Quest. It is a response given the Rift version supports room scale movement. Also, John Carmack revealed that he already got Minecraft running on Quest in the past. As much as love it, they will not be holding out for any blocky adventures on Quest anytime soon.