Do you know where you can find vindicators? You are able to find them in the Overworld inside woodland mansions and in raids. Talk about woodland mansions, you may want to know about it. So, here we provide you some information about it.

In Minecraft game, a Woodland mansion is a structure which spawns naturally in the game. This mansion looks like a giant mansion and you are only able to find this in the Dark Forest biome. In Minecraft, this is one of the only places where illagers spawn naturally or where a totem of undying is able to be gained from evokers, who drop them, also spawn in raids. 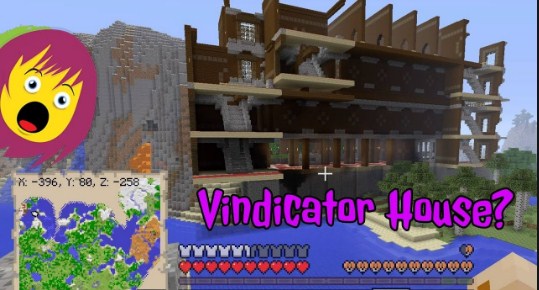 In Dark Forests and their Hills variants, Woodland mansions generate very rarely. Often, they appear tens of thousands of blocks away from the spawn. They are able to be located with woodland explorer maps which are gained by trading with cartographer villagers or with cheats enabled by using the /locate Mansion command. It is same as most randomly generated structures, woodland mansions are able to be found more often in a world using the Large Biomes world type.

Since woodland mansions are generated randomly, their structure varies. But, all woodland mansions have some things in common such as having 2 to 3 floors with a wide variety of different rooms and generate a cobblestone foundation underneath the whole structure. The top floor is less than half size of the lower floors and they all contain a large foyer and it leads to a winding maze of corridors.

Any given woodland mansion will have a lot of types of rooms and because the layout is randomly generated, several room types may not be present. Furthermore, certain rooms in the mansion may not be readily accessible and some may have sealed entrances. Other rooms may have no entrances at all.

The Woodland Mansion is protected by three new mobs named vindicator, evoker, and vex. So, in mansion you will not only find vindicator but also evoker and vex. The vindicator and evoker are a new kind of mob called an illager. You are able to find these mobs in the top floor of the mansion and you have to know that they are hostile so that they will be able to attack you.

Well, you can go there now and find the Vindicators. If you are not able to find them, you are able to summon them by using the command. How to use it? You can read another article about it on this site.