Sheep is the name of one of the most plentiful and useful mobs that you are able to found in Minecraft. They are usually able to be found wandering aimlessly throughout the Overworld. The main function if them is to supply wool and raw mutton or cooked mutton if killed while on fire. 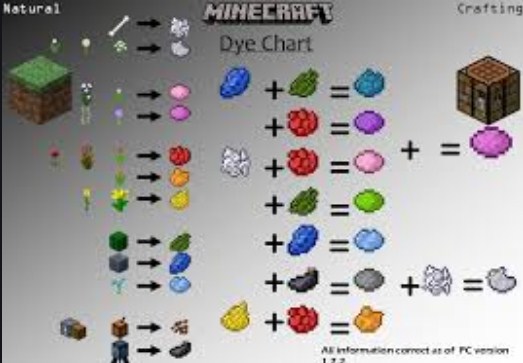 For those who want to breed sheep, here is the list of the Minecraft sheep color list (cobinations):

Talking about the appearance of the sheep, they naturally spawn with wool colored white, black, gray, light gray, brown and rarely pink. The majority of them have white coats. Here is the natural sheep colors:

Even though the use of dyes, it is possible to change the coat of the sheep to any dye color such as white, black, gray, light gray, brown, pink, red, orange, yellow, lime green, cactus green, light blue, cyan, blue, magenta, and purple.

This paragraph will talk about the rainbow sheep. Sheep called jeb_ with a name tag are a new kind of sheep released in update 1.7.4. Disco sheep which is also known as jeb sheep and rainbow sheep is able to be created when a player names a spawn egg jeb_ or by using a name tag to name an existing sheep jeb_. When the sheep spawns, its wool will constantly cycle through the sixteen possible colors with a fading rainbow effect. Apparently, the color of wool a disco sheep will drop is unaffected by its rainbow coloring. Instead, it will drop wool of the original color of it before the rainbow effect was added.