According to the PSU site, Minecraft 2.08 PS4 has been released and now it is available for download. It clocks in at 188 MB in size. This update resolves issues which are related to gameplay, crashing and more. This version of Minecraft also includes stability and performance improvements. 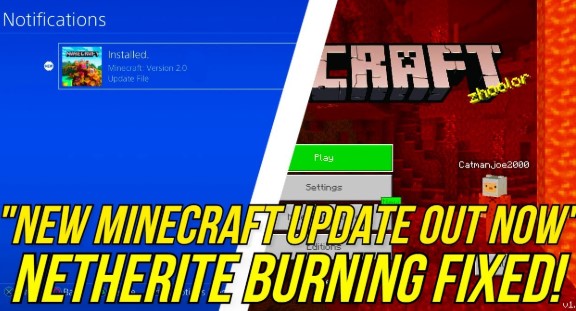 Those are the patch notes of the update of Minecraft PS4 2.08. If you have not get this update, you can update now to get the new features and also to get rid of some issues that you faced before this update has come.

According to Gamepedia, Minecraft: Playstation 4 Edition is the edition of Minecraft which is developed by 4J Studios and also Mojang Studios for the PlayStation 4. This edition was announced on August 20th, 2013 at Sony Interactive Entertainment’s exhibit at Gamescom 2013. It was available for purchase on the PlayStation Store for $19.99 between September 4th, 2014 and December 9th, 2019 when Bedrock Edition was released on the platform.

On October 3rd, 2014, a retail version was released and it can still be bought. On PlayStation Store, DLC for the game is still available. Same as Xbox One Edition and Nintendo Switch Edition players, the owners of PlayStation 4 Edition have the choice to be able to download the Bedrock version and it is free. But, not all DLC will transfer. Minecraft: PlayStation 4 Edition is able to be played on the PlayStation Vita through Remote Play. If we compare PS4 and PS3 Edition, PS4 edition includes world sizes up to 5120 x 5120 blocks which means that it is 36 times larger, 18 chunk render distance, amplified worlds and other enhancements which are offered by the PS4. So, have fun with this Minecraft PS4.