Sometimes, everything is just not enough. There is a randomly generated world that is essentially infinite in every direction called Minecraft but what do the gamers do? Some of them mod in a craftable rocketship and blast themselves right off that world to find some new ones.

The thing called Galacticraft that was created by Micdoodle8 allows you to break the chunky bonds of gravity, launch yourself into space in your handcrafted rocket, build an orbiting space station, and land on and explore the moon. This one is currently in development. This mod introduces many new dimensions based on the Solar System. Moon is the first stop, and to reach there you need your handy and dandy Spaceship. 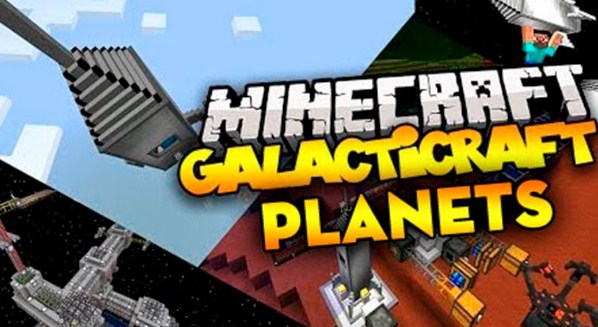 Basically, Galacticraft is like a dream come true mod for a lot of players who ever wanted to explore the space of Minecraft world. This one allows you to travel to new planets with your own spaceship. Aside from that, you can also explore a lot of dungeons or build even you own space station where you are able to try the astronautics experience.

Here are the features that will be added by Galacticraft mod. First, you are able to travel throughout the solar system. Second, create and customize your very own spaceship. Third, explore new moons and planets. Fourth, added new mobs and lots of new items and tools. Fifth, there will add some new dungeons.

How to get Minecraft mods 1.7.10 Galacticraft installed? The first thing that you have to do is to download and install Minecraft Forge. Minecraft Forge is the name of the successor of Modloader. To install it, please follow the steps. First, download Minecraft Forget Installer (jar). Second, open the file using a java running program. Third, check “Install client” and press OK.

After installing Minecraft Forge, it is time for you to download the mod called Galacticraft on its offical website. Then, find the Galacricraft version that you want to play. In this case, it is Minecraft mods 1.7.10. Please keep in mind that you need to download all three files for Galacticraft. The first one is from GalacricraftCore, the second one is from Galacicraft Planets, and the third one i s from MicdoodleCore. Before moving on, it is better for you to check carefully that the downloads of all three files completed. In case your internet connection is slow, or you are downloading the other stuff at the same time, then a Galacricraft download might need a minute or two to complete. The next thing that you have to do is to drag the three files you just downloaded into the mods folder located in the .minecraft folder. After that, you can start Minecraft and play. If it is your first opportunity playing with mods then you might need to set the Minecraft launcher to launch the right version of Forge. Select the Forge profile on the bottom left.