What things do you expect to come in Minecraft? Do you imagine being in a mesozoic era where you are able to live around dinosaurs? If you really dream it, now you are able to make it true in Minecraft. Why? Now, Minecraft collaborates with pop culture’s favorite reptilian franchise.

What can we find in this Jurassic World park of Minecraft? You are able to find more than 60 dinosaurs to the entire new experience. And there, you will play as a park manager who will interact with different NPCs over a series of new quests and expeditions to find more dinosaur DNA. Also,  keeping the attractions open is one of your goals in this game. 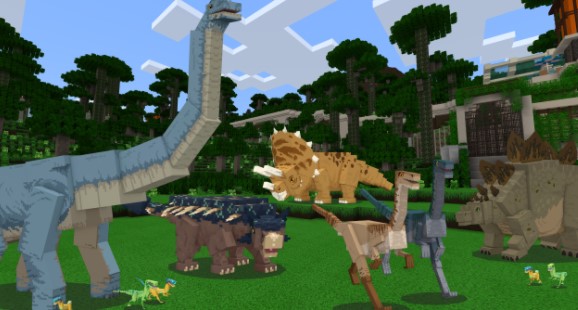 Do you want to use vehicles? You are able to do it in this game and also you will have chances to get 21 popular skins and hybrids for even more customization. This Jurassic World DLC pack is now available on all platforms which has support for the Bedrock version of Minecraft and will set you back 1,340 Minecoins at the Marketplace. What can we do if we are not using the in-game currency? You do not have to worry because you are able to buy the Jurassic World of Minecraft pack for $7.99 USD in the Minecraft Marketplace.

If you want to craft and train dinosaurs and build exhibits, you can get this Jurassic World pack. There is also a free Character Creator item namely the rare Blue Hoodie which is also released by Minecraft to help you blend in with these awesome creatures.

What devices do you use to play Minecraft? You may wonder whether your device can be used to play this Jurassic World or not. Fortunately, anyone can play this game since Minecraft Jurassic World is available on all platforms such as Android, iOS, Linux, Mac, PC, Xbox One, PS4 and Nintendo Switch.

So, if you have dreamed to have experience in a prehistoric world with dinosaurs in it or you may want to get a different experience in Minecraft, you are able to get this Jurassic World pack in the Minecraft Marketplace now.