n the previous article, we explain about how to make or get a custom head in Minecraft. Now, you may wonder how to get player heads in Minecraft Java. If you want to do this, you will need to use a command. What command is it?

If you want to get player heads in Minecraft, you are able to follow the steps below. 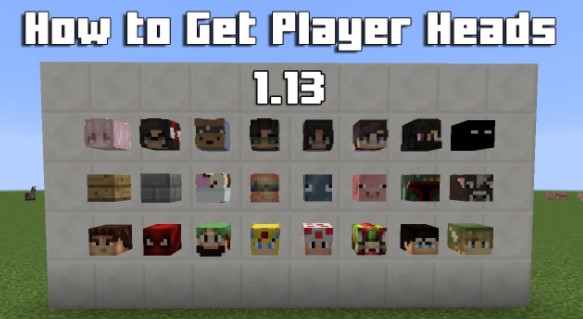 Since this command is sensitive, you have to pay attention to where the capital letters are.

Heads in Minecraft actually are decorative blocks which were added in 1.4.2, The Pretty Scary Update. You are able to put them in the world or they can be worn by any humanoid mob or player as a helmet. It is important for you to know that heads are only able to be used for decorative headwear.

There are six different heads that you are able to gain in Minecraft including Creeper, Skeleton, Wither skeleton, Zombie, Ender Dragon and player head. Do you want to obtain The Wither skeleton head? If so, you have to kill Wither skeletons and as of 1.8, the creeper, skeleton and zombie heads may be able to be obtained by killing the respective mob with a charged creeper explosion.

How about obtaining the dragon head? You are able to get it by getting into the Outer End and then breaking the head on an End ship which is able to be found beside some End cities.

If you want to get a player head in the Minecraft survival mode, there is no way without cheats. You are able to recreate a specific player’s head by using this command /give @p skull 1 3 {SkullOwner:(username)}.

There is some trivia about heads in Minecraft. Here are some of them.