If you like watching gaming content videos on Youtube, you may know Iballisticsquid. If you know him, then you may want to know the texture packs that he uses in Minecraft. Usually, people want to use what a Youtuber uses because they see that his gaming is awesome.

Iballisticsquid uses the Sphax PureBDCraft texture pack. Some people say that he uses it in a game called Race To The Moon. This is a comic book inspired texture pack which has a bright and cheerful feel. This pack is available in a variety of resolutions. It can also support a number of popular Minecraft mods. Even in the video of UnspeakableGaming Youtube channel, this texture pack is one of the top 5 Minecraft texture packs besides Life, Budpack, OzoCraft and Smoothic. 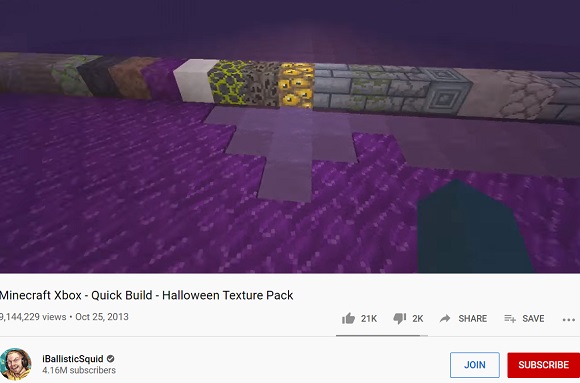 It is gorgeous, and essentially reverential, upgrading of the base Minecraft graphics. Switching between them is like putting on glasses and seeing everything clearly for the first time. The ore is full of clear gems, the new grass as chunky as an anime character’s head. It is sharp, colourful and a good upgrade that retains its flavour. It has been designed to be able to work on the recent version available so it can work well in the 1.14 and above release.

It has been made and focused a lot on giving a shiny and pretty design with a clear predominance of yellowness over every texture and block. So, it makes it so strong that even the usual cobblestone and the derivatives have marked that color. It also can change everything to a different texture. It has a lot of work behind from original creator. It is not the cleanest resource pack, but it has a big point on giving a fresh full look to Minecraft again. If you use the more 3D items add-on, you will be able to get improved 3D models for items such as swords, axes, arrows and many more.

His real name is David Spencer and he was born on January 29th, 1992. He is an English Minecraft Youtuber from Yorkshire, England. His Youtube channel is iBallisticSquid and now he has more than 4.16 million subscribers. The total views of his Youtube channel is more than 2 billion. It is known that he joined Youtube on March 10th, 2011. He is famous for his funny humour and spirit throughout his videos.