BedWars is a strategic PvP game with a lot of styles which are able to lead you to victory or even defeat. Here, you have to be able to protect your bed while trying to kill the enemies. Without the bed, you are not able to respawn.

In this game, each base has a Summoner and it is where you are able to collect different ingots. Also, each base has merchants, from these you are able to purchase almost everything you will need in the game including such things as blocks for building out the other islands and protecting your bed, armour, weapons and even base upgrades. 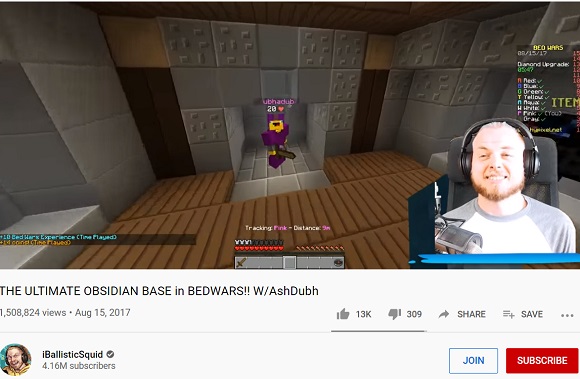 To be able to get the most powerful items in this game and also to fully upgrade your summoner, you have to go to the other islands where you are able to find Diamond and Emerald summoners. However, you need to be careful because everyone else is going to be wanting these as well. If you have braved going over to the other islands to find the Diamond and Emerald summoners, you will head to the central island. It is the deadliest place of all where you are able to find the Specialist and the Enchanter.

For your information, iBallisticSquid Youtube channel now has more than 4.16 million subscribers and the total views of his videos are more than 2 billion. He joined Youtube on March 10th, 2011. If you like his videos, then you are able to subscribe his Youtube channel.