This page teaches you how to find enemies in Minecraft. Apparently, slime spawn in swamps and in underground caves. Killing a slime gives you slimeballs, which are able to be used to craft items like sticky pistons and slime blocks.

Part 1: Finding Slimes in a Swamp

If you want to find slimes in a swamp, please follow these instructions. First, travel to a swamp biome. Swamp biomes are marked by dark trees and grass, vines hanging from trees, and some bodies of water. You will usually find them in ravines or as an extension of a forest biome. Second, find the flattest place possible. Swamps are usually flatter compared to most other biomes, but you will normally want to find a flat, wide area within the swamp. Third, enable your coordinates. On Mac and PC, you are able to do this by pressing the F3 key. After that, you will see a lot of white lines of text pop up in the top left side of the screen. On the Minecraft console and Pocket Edition versions, you will have to open a map to view the Y coordinate. 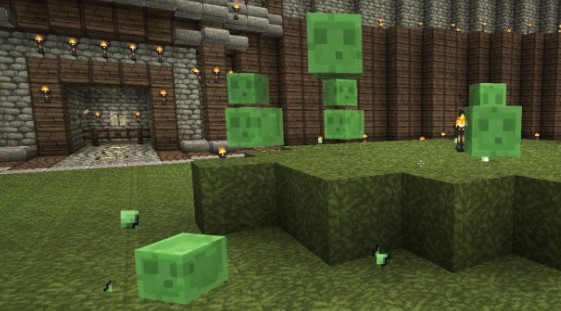 Fourth, make sure the spawn area’s Y coordinate is between 50 and 70. When in that area, slimes will show up between the 50th layer and the 70th layer. Fifth, find a dark spot. Keep in mind that the light level of your selected area must be seven or less. You are able to create an artificially dark area by covering a section of the swamp’s canopy with a dirt block ceiling and walls, or you are able to just find an area with a low enough light level. Sixth, make sure the spawn area has at least three blocks of vertical space. Slimes need two and a half of vertical space to spawn, so you may need to clear out a few foliage, which may in turn raise the light level. Seventh, retreat at least 24 blocks away from the spawn area. In fact, slimes will not spawn if a player is within 24 blocks of the spawn area, and they will de-spawn if a player is 32 or more blocks away. Eighth, wait for a full moon. Slimes spawn usually during a full moon, so you may want to make a small shack with a bed nearby and wait for the full moon part of the cycle. Ninth, try to force the slimes to spawn. By creating some platforms with at least three blocks of vertical space between them, you are able to increase the number of surfaces on which slimes are able to spawn.

First, look for caves below the 40th layer. Second, add torches to the cave. Third, clear out a 16 by 16 by 16 room. Fourth, make four one-block high platforms. Fifth, retreat at least 24 blocks away from the spawn area. Sixth, wait for slimes to spawn. In case you do not see any slimes within a standard night and day cycle, you will have to find a new cave.