Minecraft Earth is an all-new augmented reality game that you are able to enjoy through your mobile device. It allows you to bring Minecraft into the real world. You are able to have exciting adventures, build something incredible together with friends, and then step into your life-sized creations. On iOS 10+ and Android 8+ devices, Minecraft Earth will be available.

In May, Minecraft Earth was first revealed. Following its beta, it has been slowly rolling out early access across the world. First, it hits in Canada, Mexico, New Zealand, The UK and other countries. Now, Minecraft Earth is available in early access in the US and you are able to download it for iOS and Android. 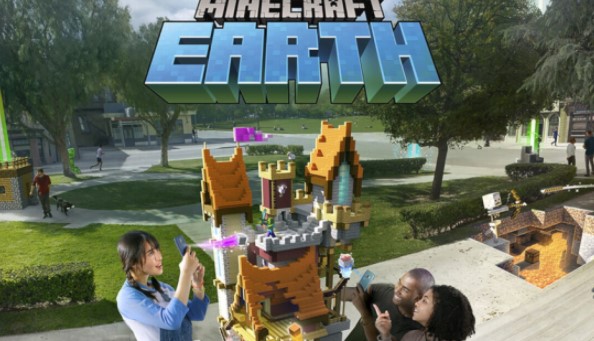 Before you are able to start playing, there are some steps that you have to go through. You have to wait a bit for the app to install a content update, sign in with your Microsoft account and also you have to accept the Terms of Service which ask you not to trespass or operate with a vehicle while you are playing the game. Then, you also have to pick how your character will look, go through a brief tutorial and then you are able to start exploring.

After that, you will have free rein to be able to check out the world and play around with the app. You will be able to see a map of your neighborhood, but Minecraft-ified where you are able to tap around on points of interest to mine them for getting materials. Do you want to test the AR-based building? You are able to do that by dropping a little plot of blocks right in the center of your apartment and adding materials that you have collected to it.

In this Minecraft Earth, there are adventures which are limited-time, collaborative building, daily challenges and a character creation system. It seems that these things are fun to explore, especially if you are able to get a group of friends together to be able to build a shared Minecraft plot.

However, according to someone who has played it, the app is a little bit buggy. Sometimes, the app will not register touches and when it is filming that GIF, the plot of land will slide away from the camera as if it was on ice skates. However, it is understandable since it is an early access app.

Even though this game is still not the full-fledged version, however Microsoft and Mojang have been hyping for months and it will allow you to be able to create dioramas, collaborate with friends on projects and also tackle mobs in adventures.

Since the US is one of the tenth countries which can get early access to this game, so for you who live in the US, you are able to try this game to get a different experience.