There are 16 of dyes. Most of them are renewable resources. Aside from that, most of them are obtained by blocks and items that spawn in the world and then be extracted in various ways such as crafting, mining, or smelting. A few of them are able to be only obtained through combinations of specific dyes. 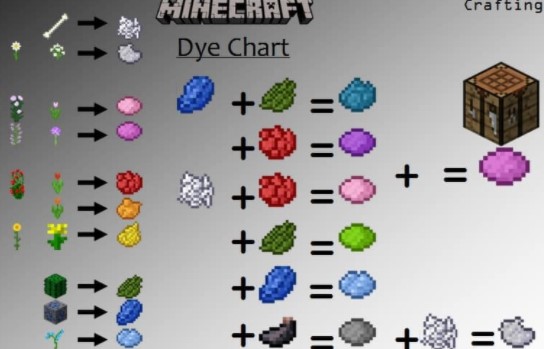 Aside from those primary, quasi-primary, and secondary dyes, there are also some old ones. Here are those old dyes:

Just like red dye, green dye is also considered as a primary dye in Minecraft and is therefore a crafting ingredient in other dyes such as lime dye and cyan dye. You are able to craft a green dye by smelting cactus in a furnace.

One of the most popular primary colors is called yellow dye, which was known as dandelion yellow. This one is created by placing a dandelion or sunflower into the crafting grid, yielding 2 dyes.

There are also two ways that you can use if you want to craft orange dye. The first one is by crafting orange tulips and the second one is by combining a rose red dye with dandelion yellow dye, yielding 2 orange.

The secondary dye name purple dye is created by placing 1 lapis lazuli and 1 rose red anywhere in the crafting grid to yield 2 purple dyes. This one is usually used to make a royal effect when applied to decorative blocks. You are also able to use this dye to make magenta dye.