Minecraft was released in 2011, and since then has gone on to win both fans, awards and critical acclaim around the world. Recently it was announced that a new Minecraft game will enter the fray, revisiting a familiar genre – but in a uniquely Minecraft way. 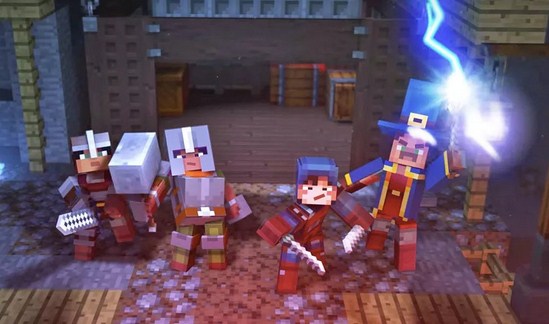 For those who may not be familiar with the original game, one element of the original sandbox game is adventuring underground for the resources. Usually, those adventures are very risky due to all the usual underground hazards such as the creepers, zombies, spiders and the all engulfing lava. Apparently, Minecraft Dungeons ramps this up to maximum. When you control your own adventurer when they heroically run head first into dungeons to complete their quest and save their fellow villagers from the evil Arch-Illiger.

In the official site of Minecraft, it is stated that the game is going to support cross-platform functionality between all platforms. This includes the PC (Windows 10), PS4, Xbox One, and Nintendo Switch. Unfortunately, crossplay functionality will not be supported initially during the game’s launch on May 26. Instead crossplay is going to come to the game as part of a free update post-launch. You are able to check back soon to find out more news related the game’s crossplay status.

WHAT IS CROSSPLAY & CROSS PLATFORM?

One of features shown in the trailer for Minecraft Dungeons is multiplayer. It included several great footage of a team of adventurers coming together to face the whole manner of obstacles in their way. With the success of crossplay within the Minecraft Universe, it will be understandable if people assumed that crossplay will extend to cross platform multiplayer also. Officially, at launch players are going to can play online multiplayer on the same platform. The good news is that they are looking forward to enabling cross-platform play in a future free game update. When exactly the free update for the game will be, we are going to have to find out.