In fact. Minecraft always cares about anything related to its community. For a decade, Minecraft has been providing all the things that the community wants. The reason leads Minecraft to create any awesome objects that can attract the members of its community to feel amazed as the masterpiece of Minecraft in real life.

Furthermore, Minecraft presents the toys and plush that hopefully can get rid of boredom of the Minecraft community. Due to Minecraft is one of the hottest popular games which are played by a 10-year old kid or 30 years old, so, providing the collection of toys and plush is a gorgeous idea of Minecraft. 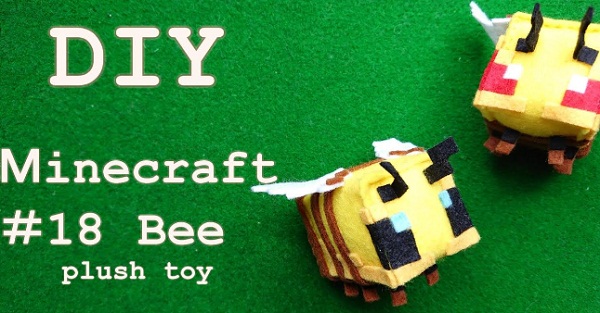 Minecraft has a big hope that the players of Minecraft either pro or newcomer will love to play Minecraft more.So, the Minecraft Bee Plush presents to fill the time of Minecraft players while playing the game.

Minecraft Bee Update 1.15 has been released months ago. In this new update, Bees are introduced as a new mob in-game. Then, one of the new features of this update is to allow the players to collect honey from the beehive. Certainly, there are still lots of new things that you can find in this update.

From this new update, there is a request from the community of Minecraft to create any toys and plush.

In fact, the Mojang company has made the toys and plush for almost every character and mobs in Minecraft. So, the toys and plush are saled in minecraftshop.com as the official website for sale of books, toys, accessories, clothing, bedding and many more for Minecraft fans.

After the update, the players will be expecting a lot for Minecraft Bee Plush and toys and also accessories. Unfortunately, Mojang has not made for the Bee plush and toys for sale on the official shopping website. In fact, the Minecraft players, especially kids, are waiting for Bee Plush for sale.

But, you do not have to worry although the Bee plush and toys are not for sale yet, of course, you can create it at home.

Then, in this chance, we are going to share one of the ways in making bee plush and toys that we got from one of creative guys on Twitter @OomlesArt.

He also posted the DIY of making the bee plush on DeviantArt, which is social media for artists.

Here are his awesome ways to make the Minecraft bee plush pattern:

Then, fill it with dacron.

You can first draw the shape of eyes, mouth, nose of bee in the top of the flannel, then you can cut it. After that you can stick it on the head of the bee as you have created in the first step.

Step 4: Create the Buttocks and Pattern

Glue the brown flannel of 5x144mm surrounding the be’s body.

To create it, you just stick the little black flannel on the top of the bee’s eyes.

To create it, you just glue the white flannel on the top of the bee’s body. You have to create two forms of bee’s wings.

If you want to know the tutorial for detail, you can watch a tutorial video on Dad’s work channel at here  titled [DIY Minecraft ] Bee – How to make a plush toy -.