In Minecraft, there is Bedrock Edition. This is a version of Minecraft which has been adapted for multiple platforms and developed by Mojang AB, Xbox Game Studios, 4J Studios, and SkyBox Labs. Now, you may want to know about Survival Maps in Bedrock Edition.

Well, first let see what map in Minecraft is. Map is an item which can be used as a visual aid when you are exploring the Overworld or The End. This thing permits you to be able to capture surface features of areas that you visit, plotting them on a map which is hand-held. A map can permit you to find your way back easily to a location that you had previously found. In multiplayer, you are able to use a map to find other players who happen to be in the area that map covers because they will also appear as icons on the map. 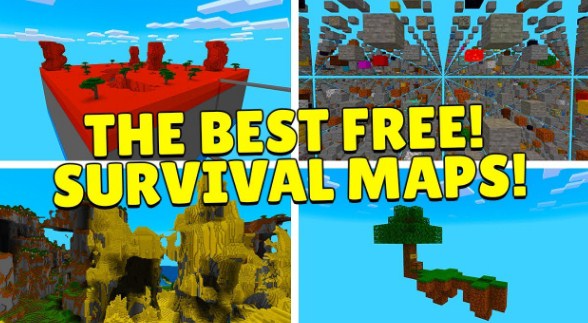 Now, what is Survival map that we can use for Minecraft Bedrock? There is Advancaed SkyGrid Survival (Bedrock Edition). This map is a unique map and also you will find biomes and the EndGrid. In this map, the renowned Minecraft world which we usually play is transformed into a grid of a diverse range of blocks suspended over the void. It creates a challenging and fun play-through to Minecraft. There a thing which is vital to avoid any unnecessary deaths and it Parkour mastery. The purpose of it is similar to the vanilla Minecraft which you have to go to the end and beat the dragon.

There is only one rule in the map. What is it? You are not allowed to use cheat.This map is created by MrJohnWeez and ported by FantasticToast. Special features in this map are:

If you want to know more about Survival Maps in Bedrock Edition, you are able to watch some Youtube videos about it and you can also access a forum and find a thread about it. One of Youtube videos that you are able to watch is a video of ECKOSOLDIER entitled The Top 5 Free Minecraft Survival Maps to Download (MCPE/ Bedrock) which was uploaded on February 29th, 2020. In the description of the video, there are links of the maps that you can download.