In Minecraft, you may often see mobs. What are they? They are living entities which are affected by physics. They are able to interact with players and also other mobs. What mobs do exist in Minecraft? In this article, we will give you a list of all Minecraft mobs.

Mobs are divided into three behavioural categories including passive, neutral and hostile. Passive mobs are harmless to players. Usually, they will flee if they are attacked. They provide useful items for players if the right tool is used. Several mobs will be passive only after they are tamed. Some of the passive mobs even can protect players from hostile mobs. 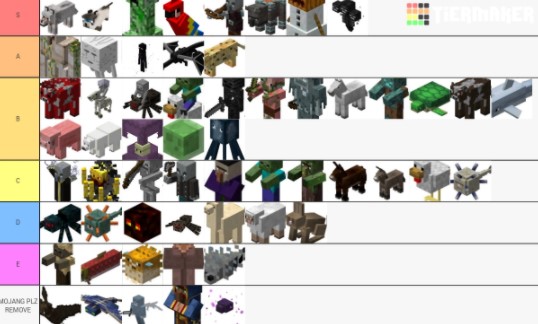 There are also utility mobs. They are created by players and they are able to protect players and villagers from hostile mobs, except for creepers. Usually, they attack hostile mobs but in certain situations they will attack any type of mob or player.

How about a boss mob? It is a special type of hostile mob which has an exceptionally large amount of health, a bigger detection range and triggers a health bar. They name to appear at the top of the screen of the player when they are on the page. These mobs are known as boss mobs because of their difficulty. They are recommended to be faced by players who are experienced. Now, there are only two confirmed boss mobs in Minecraft including Ender Dragon and Wither.

Do you want to know all the mobs in Minecraft? You are able to see in the list below.

Some mobs are able to change their behaviour in response to certain situations, for example when they are attacked. Usually, mobs drop items and experience points when they are killed. Hostile and boss mobs tend to drop rarer and higher-quality items and also significantly more experience depending on their difficulty.

Mobs come by spawning in a variety of ways. Usually, mobs mobs spawn naturally and it depends on the light level, biome and their surroundings. But, passive mobs spawn much less often than hostile mobs. Usually, these mobs spawn in upon initial chunk creation. Also, most passive mobs are able to breed, spawning baby versions of themselves.