Hypixel Network or only Hypixel is the name of a Minecraft minigame server that was created by a popular mapmaker named Hypixel. This one started in 2013 and since then, it has been growing with more and more players each day along with more content being added. 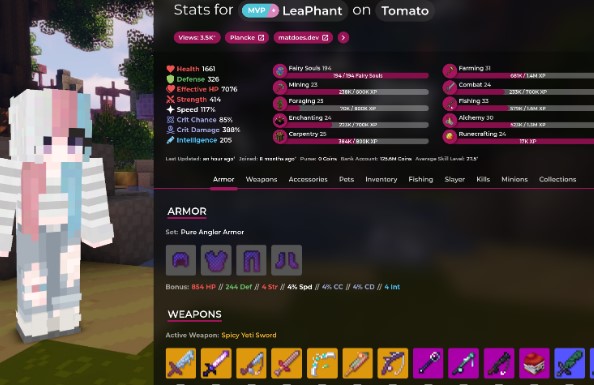 There are several features of hypixel.maxkorlaar.com. some of them include Hypixel Minecraft Server Dynamic Signatures (a lot of different signatures containing your Hypixel statistics, for a lot of different games and in various styles), Hypixel Booster Schedule Notifier (this one allows you to set a time and date and choose a certain gamemode on the Hypixel Minecraft server to notify you through email when you need to schedule your booster), Friends List (the overview of the friends of you or someone else, and their current session status), Guild Info (you are able to get all information about a guild, like their coin count, amount of members, guild tag, extras, and even statistics for specific games. Feel free to compare guild members with each other and see who is the best at different gamemodes), Statistics, and Leaderboards, Blitz Survival Games Statistics, Turbo Kart Racers Statistics, and SkyWars Statistics.

hypixel.maxkorlaar.com is really best as it shows you live Hypixel minigame statistics to everyone just by putting an image in your forum signature. This checker is really easy. All that you have to do is to enter your username to get started.

Aside from hypixel.maxkorlaar.com, some other best and recommended Hypixel stats checkers are Plancke.io and sk1er.club. All of them are recommended by the community. Just like hypixel.maxkorlaar.com, sk1er.club and plancke.io are also easy. In sk1er.club and plancke.io, you can just enter a player name if you want to know the stats of the player. Feel free to use any Hypixel stats checker than you want.