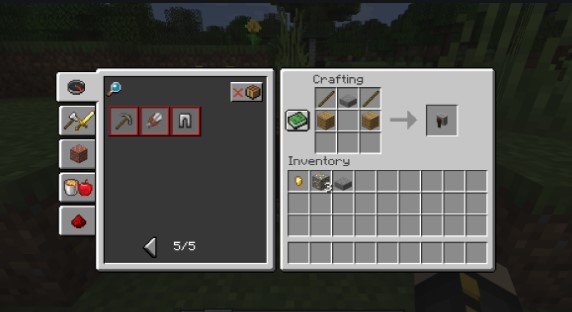 Actually, you do not have to collect all of them. The main ingredients are 2 Sticks, 2 Wood Planks, and 2 Stone Slab. For the Wood Planks, feel free to use any kind of wood such as Oak to Acacia. Each of them is pretty easy to get your hands on. Both Sticks and Wooden Planks are able to be obtained by crafting using Wood, which is abundant in all but the harshest of Minecraft seeds.

The first thing that you have to do to make a Grindstone in Minecraft Java is to open the crafting table. Just like making the other items, you have to open that table first. Then, add the ingredients. In the crafting menu, you should be able to see a crafting area that is made up of a 3×3 crafting grid. If you want to make a Grindstone, you need to place 2 Sticks, 1 Stone Slab, and 2 Wood Planks in the 3×3 crafting grid.

When crafting with the Wood Planks, you are able to use any kind of Wood Planks, such as Oak Planks, Spruce Planks, Birch Planks, Jungle Planks, Acacia Planks, Dark Oak Planks, Crimson Planks, or Warped Planks. When making a Grindstone in Minecraft Java, it is important that the Sticks, the Stone Slab, and Wood Planks are placed in the exact pattern.