An enchanting table is the name of a block that allows players to spend their experience point levels to enchant tools, weapons, books, raw materials, and armor. How to make enchantment table on Minecraft? In order to make the enchantment table, you need to have collected 2 diamonds, 4 obsidian, and 1 book.

Aside from crafting, an enchanting table is also able to be obtained by mining. If mined without a piackaxe, this one drops nothing. Despite being composed predominantly of obsidian, it is not reflected in its mining requirements, as any pickaxe is able to be used. It has been confirmed by Mojang to be intentional. 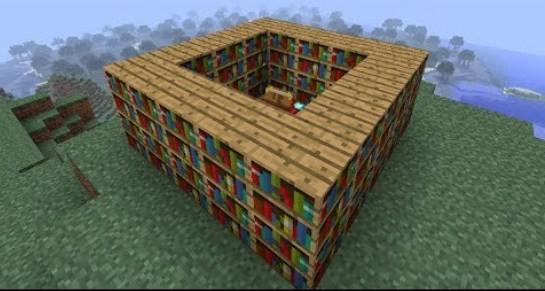 For your information, the enchanting table is ¾ blocks high. This one cannot be moved by pistons. If an enchanting table is located on ice, the player slides on it as though it is an ice block, similar with the slabs. Despite being comprised largely of obsidian, please keep in mind that they are not immune to destruction by the endear dragon, which Mojang has confirmed to be intentional.

The main purpose of the enchanting table is to enchant items. This one is able to enchant all tools, armor, and gear except hoes, shears, flint and steel, carrot on a stick, shield, elytra, carved pumpkin, mob head, lead, and horse armor. All of these things mentioned (excluding leads and horse armor) are able to instead be enchanted using an anvil and an appropriate enchanted book.

Three to five words are selected from the list and appended to each other, then displayed in the Standard Galactic Alphabet. All the words selected are random and purely cosmetic. They are not related to the enchantments to be applied to the item and are not saved on the enchanted item, meaning they say nothing about the identity of the spell, and they are displayed only in the enchanting table. The cost and one of the enchantments are the only ones known.

By default, the GUI of an enchanting table is named Enchant. However, this name is able to be customized by naming the enchanting table in an anvil before placing it, or by changing the CustomName tag using the /data command.