Apparently, farms are triggered automatically in one of three ways. First, by a system based on time. You are able to use either a redstone or hopper clock or a daylight sensor for this. Second, by making bud switches, or placing observers, that detect when an adjacent block updates. Third, using a simple redstone circuit that completes when a pumpkin grows. Pumpkins are collected in a combination of water streams, hoppers, and hopper minecarts. 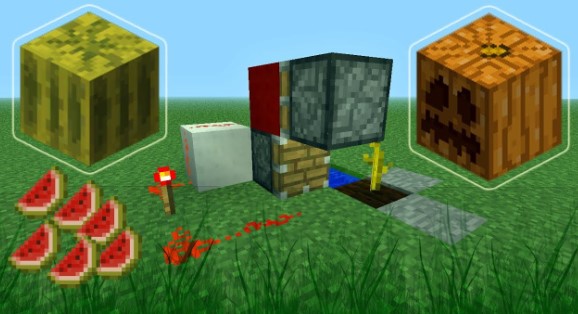 There are several methods to make an automatic pumpkin farm in Minecraft. Here are those that you can try.

Opaque block detection farms send redstone power through the space where a pumpkin will grow. When the block there is opaque, redstone power is able to pass to the next component which triggers a piston to harvest the pumpkin. Each design is made by the observer. In general, observer based pumpkin farms are easier to make, more compact, and in some cases, more efficient.

Single design detection requires only 1 piston each pumpkin stem and does not require a bud switch. This one fits with a 5×5 area and is relatively simple to build. Clock designs are powerful to this as they allow for better control over the harvesting. There is a possibility for the two rightmost plants to grow long before the first one does, so more frequent harvesting is desirable.

Dropper hopper trigger is modular and uses a dropper or hopper combo to detect pumpkin growth. The dropper should have an item to be dispensed into the hopper, triggering the piston.

Dual-piston growth detection powers a sticky piston whenever a pumpkin has grown. For your information, the sticky piston is used to power a regular piston and break the produce. This one is tileable and stackable which could be useful if you want a bigger farm. While tiling, the rightmost column is able to be rotated around the air column behind the lower piston in order to save space.

When stacking, you might want to run a hopper line next to the redstone repeaters to the bottom so everything is able to be collected at the central location. Aside from that, it may also be possible to remove hoppers from the upper layers and allow the produce to fall down to the bottom.

The design of stacked mirror variation can be varied for early game before slimeballs have been obtained for sticky pistons. This one instead uses 2 regular pistons and 2 sands per growing space. However, the height of it is 6 blocks. Basically, it is 2 times taller compared to the original one.