To make a bathroom or shower, you can start it by creating a toilet. Actually, everyone has their own way to make a shower. But, if you want to make a toilet first, then you have to create a base for your toilet. You can make 3 blocks wide and 2 blocks long. Then, you have to make a hole in the base. And in the second block of the row which is nearest to you, you have to eliminate the block to make a hole. Now, put another block in front of the hole. It will contain the water. Add water and you can put the water on the hole. Create a toilet water tank in the second block of the row which is farthest from you. To make it, you can put a block. Now, put a wooden or iron trap door on the top of the hole with water in it and it will act as a toilet seat. 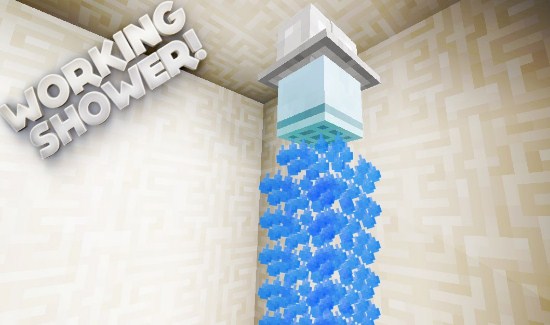 After making a toilet, now you can make a shower. First, you can make a hole on the ceiling. You can make it in a corner. Then, you have to build a chimney-like structure and you can build it on the roof where the hole is. Now, you have to put water in it. It is important for you to know that the water should come down through the hole as a pillar of water for you to shower in. If you want to turn the shower off, you can put a block in the hole. If you are good with redstone, you can use a dispenser and a lever.

Now, you can build a bath. You can make a 3×5 platform and make sure that it is 2 blocks high against a wall in your bathroom. Then, you have to make a long hole. You can break 6 blocks on the side closest to the wall. Then, put the water in the hole. After that, you can put stairs on the sides of your bath.

To help you in creating a working shower, there are some videos on Youtube that you can watch including: