The Minecraft trident has been in the Minecraft Java Edition since the Minecraft Java Edition 1.13 or since the Aquatic update as a rare drop from Drowned enemies. This one is easily one of the best weapons of Minecraft as not only it is able to be used in melee and ranged combat, but even its non-enchanted form is able to dish out more than a diamond sword, even though its attack speed is a little lower. Aside from that, if you work on your aim you are able to throw a trident up to 80 blocks away.

The most interesting thing is, you cannot craft a Minecraft trident, so you cannot actually find a recipe for this underwater weapon. Instead, you will have to grab one of these from the cold, dead, soggy hands of a Drowned mob, one of the zombies introduced with the Aquatic update. 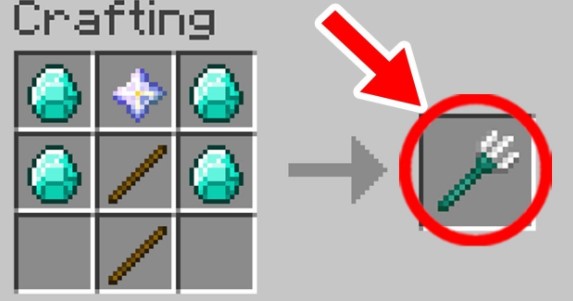 The fact that the Minecraft trident is a mob drop and as strong as a diamond sword makes it an amazing weapon early into your Minecraft adventure, provided you are powerful enough to take out a Drowned. In this page, you will learn how to get your own Minecraft trident.

If you want to get your own Minecraft trident, the first thing that you have to do is to head underwater and look for zombie mobs known as Drowned. Sometimes, these chaps will spawn into the world holding a trident, so you can just simply have to defeat them from a chance of a trident dropping, but the possibility is really small at 8.5%. however, if you are playing in the Minecraft Bedrock Edition or Minecraft Pocket Edition, then there is a slim chance that a trident will drop from Drowned that are not holding a trident, so it is worth slaying any Drowned you come across while trying to get your blocky hands on one of these. Apart from that, you are also able to use Minecraft seeds in order to create the underwater worlds for a chance to spawn Downed zombie mobs.

In Minecraft Java Edition, only 6.25% of Drowned spawn hold a trident, while the opportunity is slightly higher in Minecraft Bedrock Edition at 15%. You are able to boost your chances if you have the Looting enchantment, so make sure to go out with that equipped to make your farming more efficient. Apparently, you have an 8.5% chance of looting it if you see one of the drowned carrying it. There is a natural 11% chance of it dropping, with each level of the looting enchantment you have increasing this total by 2% of a total of a 17% chance.

Keep in mind that you cannot pick up a thrown trident. When one of the drowned throws it at you and misses, you are not allowed to pick it up to claim it. The way the trident works is similar to arrows. A looted one has random durability, but you are able to fix it by combining two tridents at an anvil.