Pumpkin seeds are able to be planted on farmland. Over time, they will grow into a stem and will randomly make a pumpkin on any adjacent block. When one pumpkin is already occupying an adjacent spot, the stem will not grow any more pumpkins until it is removed. When a pumpkin grows on farmland it will turn the farmland into the regular dirt block. 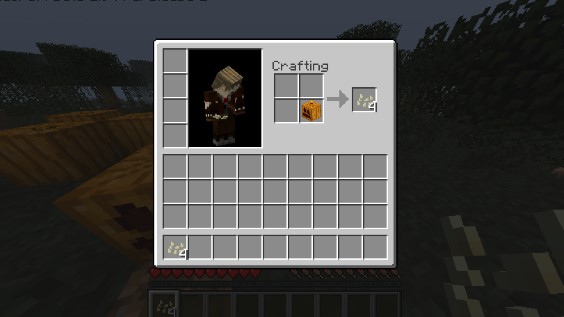 Keep in mind that the pumpkin will not grow unless one or more dirt blocks are surrounding the plant. A single stem is able to grow an unlimited number or pumpkins. By mass-producing pumpkins, you are able to use it as a way to cultivate Chicken Farms, even though the chicken will not follow you. Apparently, Melons are a better option as they give more seeds, but it takes more time to convert the block into seeds.

Pumpkin seeds spend a long time growing compared to the other crops, but no special tool is needed to collect them. In fact, pumpkins only grow when no opaque block is directly above the stem. Pumpkin seeds, as with the other ones, need a particular amount of light to grow. A torch seems to be the minimum lighting required since redstone torches or very little light will cause the seeds to pop out of the ground where they are able to be selected again.

Pumpkin seeds are able to be farmed by using the aforementioned method. The reason is because when the seeds pop out of the ground because of low lighting, they may occasionally return two seeds to the planter. As of the release of Minecraft 1.0.0, pumpkin seeds are able to be affected by bone meal only in the first stage of growth, not once they are a yellow stem. If the stem is damaged, it will leave behind multiple seeds.