In Minecraft, parrots are a passive and tamable mob, added in version 1.12. They do not do much, other than follow the adventures of the players. Players are able to make them sit on their shoulders and follow them around on adventures. How to do that?

If you want to put a parrot on your shoulder, you will have to make sure its tamed first. You are able to tame it by feeding it wheat or melon seeds until hearts radiate from it, that will mean it’s yours. Actually, you are also able to give it cookies but it will instantly die and emit poison particles. Then, all that you need to do is to walk through the parrot and it will sit on your shoulder. 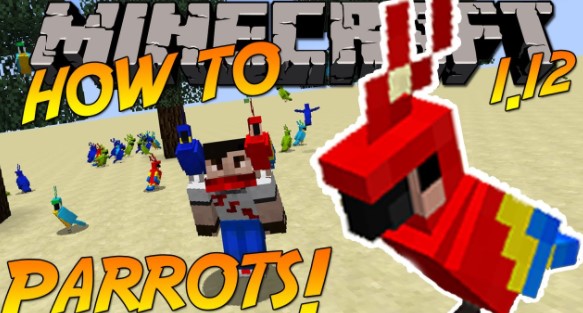 As the alternative, a parrot will occasionally make its own decision and choose to fly towards you to sit down on your shoulder. You are able to have a parrot on each shoulder at a single time and they will dismount if you take damage, mount a horse, jump down steep terrain or enter a boat.

Once again, you are able to tame a parrot in Minecraft by feeding them either melon seeds, wheat seeds, beetroot seeds, or pumpkin seeds. Please keep feeding them the seeds until they have hearts coming off them. Once it is tamed, you are able to tell this animal to sit by right clicking on it. Aside from that, a tamed one will sit on your shoulder by walking through it. It will follow you by flying behind them, so you will have to either put them on a leash or keep them sitting to leave them as your base.

Keeping the parrot on your shoulder is relatively easy. Then, what about getting it to come off of your shoulder? It may sound like a bit of a stupid question, but some players recently got a parrot and had it perched on their shoulders and now they cannot get it to come off. They are moving the location of their residence and they want to bring their parrot with them, but because they cannot turn it into an egg when it’s on their shoulder, they do not know how.

According to EMC, parrots will not leave your shoulder unless you manually type a command to release them. They may only be released on a residence you have admin on, or in the wild. You may use these commands: parrotrelease, releaseshoulders, prel, ejectshoulders, relsh followed by left/right/both on which parrot to release. For instance, /parrotrelease both. The command will able to release them as they usually would in Vanilla when jumping. Aside from that, you may also type /parroteggify, peg, eggifyshoulders, eggsh and left/right/both in order to convert them into an egg instead. This one may be done only in town areas. It will allow you to keep parrots better as decoration while traveling. Not specifying an opinion implies that you want both shoulders.