Skip to content
Homepage / Guides / How to Get Minecraft Dungeons Beta

Minecraft Dungeons is developed by a dedicated, passionate team at Mojang. It is an upcoming action adventure game in the Minecraft series set to release in May of 2020. Minecraft Dungeons based off dungeon crawler games of the past. The players are going to constantly discover new weapons and items throughout the game which are used to fend off against the monsters. Besides, the players are going to traverse swamps, canyons, and mines on a quest to defeat the Arch-Illager to save the villagers of the world. The players are able to play alone or with up to a group of four players.

By the way, what platforms will Minecraft dungeons be available on? We get information that Minecraft Dungeons is going to be released simultaneously on Windows, Xbox One, Nintendo Switch, and PS4. Also, the game is going to be available on Xbox Game Pass at launch for PC and Xbox One. So, how to get Minecraft Dungeons Beta? When you open this page, we are sure that you want to find out that information. To find out that information, just continue to reading this entire article. 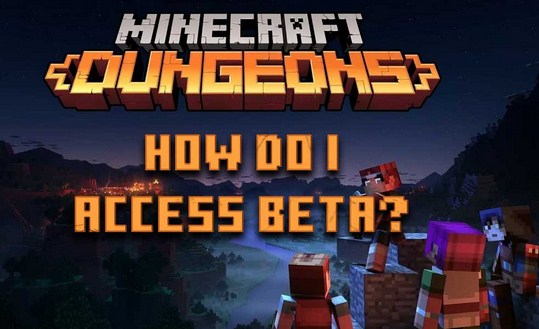 Apparently, the ongoing Minecraft Dungeons beta gives a glimpse at the title. It features a small slice of the gameplay fundamentals, the progression and loot systems, early story levels, as well as a portion of the world to explore.

You have to note that the initial wave of Minecraft Dungeons invites went out recently on 25 March 2020, marking the start of the official beta period. The beta has only been promised for a short window of time, so it expect closure at some point in April. For your information, the full Minecraft Dungeons release date is set for 26 May 2020, following a recent delay. Also, every player who gains access to the Minecraft Dungeons beta will receive three codes. So, if you have not got one by now, you have to looking for.

Minecraft Dungeons is still on track for its 26 May release date, so you have to really consider locking in your pre-orders before then. Minecraft Dungeons is going to be available on PC, Xbox One, Nintendo Switch and PS4. So, the players from all walks of life are sorted. For your information, the game is going to cost £14.99 ($19.99) across all consoles and on. You are able to pre-order for PC at most game retailers.

How to Reload Mags in Minecraft VMW

How to Get the Nether Update Minecraft

How to Get Honeycomb in Minecraft Without Getting Attacked

How to Pick Up a Beehive Minecraft

How Do You Use a Smithing Table in Minecraft