Skip to content
Homepage / Guides / How to Get Fermented Spider Eye

Minecraft is the name of a Lego style video game in which users are able to create their own world using blocks, originally based around the idea of building structures to protect yourself from monsters. This one was advanced to include some other features and plots.

There are a lot of different kinds of weapons you are able to use to defend yourself. One of them is called the Fermented Spider Eye. It is a potion ingredient used to brew potions with negative effects and the Potion of Invisibility. 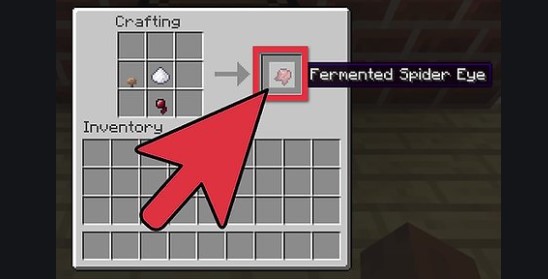 The Crafting Table, which is also called Workbench, is one of the most important blocks in Minecraft. If you want to create a crafting cable, the first thing that you have to do is to get at least 4 Wood Planks. They are able to be obtained by cutting a tree to get a Wood Block and then putting it in your crafting window, which is able to be found in your inventory. Then, use the Wood Planks. with them, you can use the crafting window and then place one Wood Plank on each empty box. After that, click on the Crafting Table. You can just place it in your inventory to finish the crafting process. Aside from that, you are also able to use the Crafting Table to create the other tools, weapons, and armors.

The first step in obtaining the necessary items is to get the brown mushroom. You can find it in the dark caves and the shady areas, so please look in swamp biomes or in the Nether for them. They are mostly found there due to its low light conditions. For your information, the brown mushrooms have also been known to spawn in jungles and open caves. After getting the brown mushroom, it is time for you to get sugar. To craft it, open your Crafting Table and then put one Sugar Cane in the middle of the empty boxes. When you are done, please kill spiders. Spider Eye can be described as a poisonous food and brewing item. This one is dropped by Spiders, Witches, and Cave Spiders. As for spiders, they are able to be found in the forest, but the best source for the Spider Eye are from Cave Spiders since they are able to be found quickly if there is a spawner nearby.

First, use the Crafting Table. With the ingredients stored in your inventory, you can open your Crafting Table to start crafting the fermented spider eye. Please put the Sugar in the middle and then put the Brown Mushroom to the left side. Keep in mind that the Spider Eye should be placed below the sugar. Second, use the Fermented Spider Eye for brewing. Usually, this one is used for brewing unique kinds of potions, including Potion of Weakness, Potion of Harming, Potion of Slowness, and Potion if Invisibility.

How to Use a Command Block in Minecraft

How to Make an Observer in Minecraft