This Minecraft guide explains how to get a zombie head with step by step instructions. In the game, a zombie head refers to an item that you are not able to make with a crafting table or furnace. Instead, you have to find and gather this item in the game. Here is the information on how to add a zombie head to your inventory. 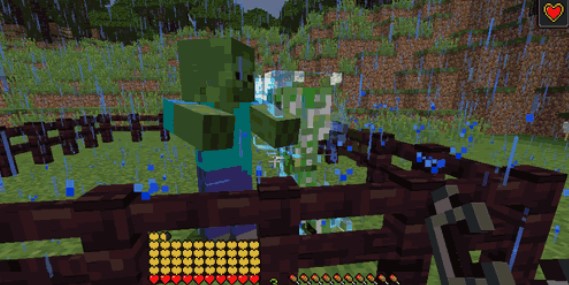 For those who are having trouble finding these mobs, you are able to use a game command in order to summon a zombie and another game command to summon a charged creeper. When you find a creeper and a charged one, it is better for you to fence them in so that they do not run away. Apparently, the lower light levels from the rain prevent the zombie from bursting into flames and dying before you are able to get the zombie head. You might want to give yourself the Absorption effect that will get the extra yellow hearts to your health bar so you do not die from the charged creeper explosion.

Another thing to keep in mind is that the fuse on the charged creeper should be ignited and soon it will explode.

Once the charged creeper has exploded, two of the mobs will be dead and there will be a hole from the explosion. Since the charged one killed the zombie, you need to find a zombie head floating on the ground at the bottom of the hole. Do not forget to pick up the zombie head before it disappears.