If you play Minecraft, you are able to add mods. Mods are software which can customize graphics and gameplay elements of the game in some way. There are also modpacks. What are modpacks? It is short for mod packages or modification packages and they are packages of mods. Modpacks were created because of how complex configuring mods to work together was.

SevTech Ages is one of Minecraft modpacks which is packed with content and progression. This pack focuses on providing you a long-term progression experience with a purpose. This modpack introduces a number of mechanics such as dynamically hidden items and recipes based on progress, hiding ore until unlocked, new mobs appear when you progress further and many more. 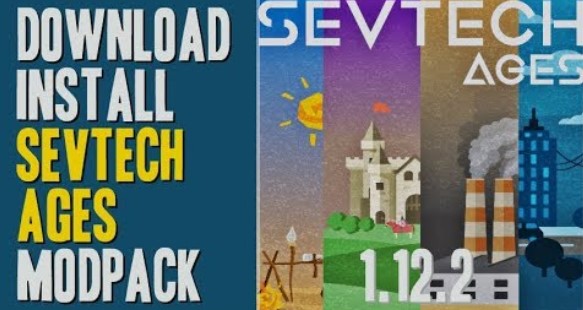 If you have Twitch Desktop app on your PC, you are able to open it and then login to your Twitch account. If you are on the homepage of the Twitch, now you have to click on the Mods menu at the top of the screen. Then, click on Browse All Modpacks. There, you will see SevTech: Ages modpack. If you do not find it, you can search it in the search bar there. You can click on the Install button on the SevTech: Ages modpack to download and install it.

You are able to watch these videos on Youtube to help you know visually how to download and install SevTech.

Well, this modpack aims to introduce a lot of mods which are not frequently used while altering some more widely known mods. The pack also features a lot of custom mods for the best player experience. Every feature in this modpack is able to be done in Multiplayer as well. Every progression point is player based and it is not server based. It means that you are able to play on a large server and not be left behind if you start after every one else.