Skip to content
Homepage / Guides / How to Craft a Anvil Minecraft 1.15.2

Minecraft Java Edition 1.15.2 is a minor update. It was released on January 21st, 2020. In this update, there are new game rules and bugs fixes as well. Since there are some changes there, you may wonder how to craft an anvil in Minecraft 1.15.2. Is it still the same as in the previous version?

If we see in the changes and fixed bugs of Minecraft 1.15.2, it seems that there is no change for making an anvil in Minecraft. So, you may still be able to craft an anvil as you do in the previous version of Minecraft. 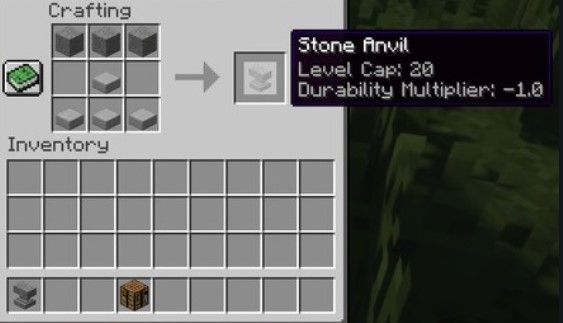 To make an anvil in Minecraft, you need to prepare these materials:

After you prepare the materials above, then you are able to craft an anvil in Minecraft by following the steps below.

In the first row, you need to put 3 blocks of iron.

In the second row, you need to put 1 iron ingot in the middle box. It means that you have to empty the first and the third box.

In the third row, you need to put 3 iron ingots.

In Minecraft, an anvil is a block which permits you as a player to be able to repair items, rename items and combine enchantments. If you want to mine anvils in Minecraft, you have to do it by using any pickaxe. If you mine them without a pickaxe, they will drop nothing. If there is a damaged anvil, it will generate in the Forge Room of the woodland mansion. An anvil is able to be damaged and destroyed from falling. If anvils fall from a height greater than one block, the opportunity of degrading by one stage is 15% ×  the number of blocks fallen. The state of damage does not affect the function of the anvil. However, only anvils of the similar damage state can stack in inventory.