Skip to content
Homepage / Guides / How to Build a Mob Grinder

Mob grinders are known as the last part of a mob farm and are able to be used to kill mobs in massive amounts while also collecting all dropped items at a convenient location. They are mechanisms and are able to be considered as a special kind of trap.

Mob grinders are often specific to a particular size of the mob. The tall ones usually refer to tall hostile mobs, known as skeletons, creepers, and zombies, but are also able to refer to zombie pigmen. The small ones are only 1 block tall and are spiders, chickens, sheep, ocelots, cows, wolves, and pigs. 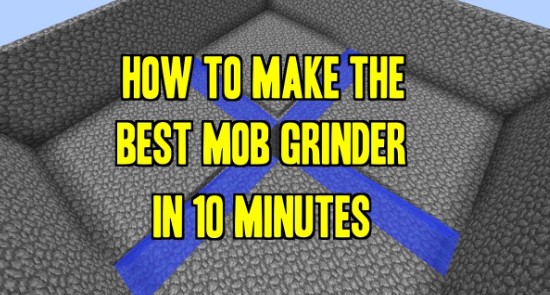 In addition, mob grinders will not produce music discs or rare drops as the mob deaths do not meet the conditions for those items. However, if built in a certain method the conditions are able to be favorable to induce such situations, but will need you to impart minimal input in such examples.

If you want to build a mob grinder, the first thing that you have to do to build a mob glider is to find the perfect building space. It is better for you to find a large flat area. Then, get started. You can start by building a row of twenty blocks. Afterward, add water. Please do the same two blocks over and connect them at the ends. Then, you need to fill both ends with water and you should have four blocks in the middle without water.

The next thing that you have to do is to make a cross. You have to break the two blocks that are not touching water on both sides. Then, add a row of eight blocks so it can form a cross and then fill them with water. Aside from that, you need to also fill in the empty spaces. The sixth step is to make the hole of death. In the four blocks without water, please dig a really deep hole. This one has to be really deep so that the mobs will die when they fall. Some people think that the minimum is 25 blocks.

After making the hole of death, you need to get back to the surface. At the bottom of your hole, you should dig into the side of the wall and make a long tunnel. If it is not long enough you will dig into your grinder. Then, dig up putting ladders on the wall as you head to that place. Do not forget to put a door on the big hole that mobs will die in.

The last thing that should be done is to make the room completely dark. You can add walls and a roof and make sure no light is getting in or mobs will not spawn. Everything should be completely dark. When you are done, you can just walk down the ladder and go down the tunnel, open the door and you will be able to see free mob items. Feel free to enjoy your unlimited arrows.