Skip to content
Homepage / Guides / How to Brew Potions in Minecraft

The first thing that you have to do to brew a potion is gathering your materials. You will need some things that can be found in the Nether. So, you have to go to the Nether by building a Nether portal. There, you will need good armour, a bow and a lot of arrows. If you have armour with a Fire Resistance enchantment, it will be better. 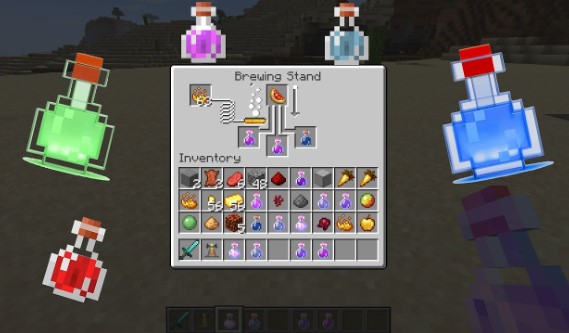 After that, you have to find a Nether Fortress. It is a building made out of Nether Bricks. Now, you have to get some Nether Wart. You are able to explore the fortress until you can find some Nether Wart which will be growing in Soulsand at the bottom of a staircase. After that, you are able to get blaze rods. You can find it, kill it and collect at least one Blaze Rod.

If you have done it, now it is time for you to set up your Brewery. You will have to craft a brewing stand by following these steps.

If you want to start brewing, you will need some glass, some Nether Wart and also some potion ingredients. So, you have to prepare water bottles now. You can craft and fill it by following the steps below.

You will also need to craft a blaze powder because you will need fuel. Now, you are able to load the brewing stand. There, you have to place the water-bottles in the bottom three spaces. Then, you are able to add the first ingredients which is almost always be Nether Wart. You have to put it in the top slot. You will also use some Blaze Powder that you have crafted to power the brewing process. If you have added them, the brewing process will begin. If it is done, it will turn into a potion named Awkward potion.