In the popular game called, Minecraft, dyes are known as the items used to change a lot of things. Do you know how many dyes are there in Minecraft? If the answer to the question is not, here is the information for you.

Apparently, there are 16 dyes in Minecraft. They are divided into three: Primary, Quasi-Primary, and Secondary. 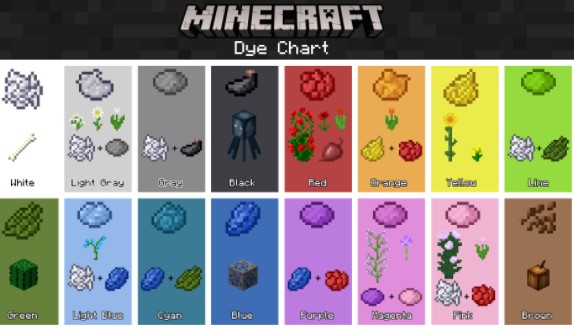 The primary dyes are created only from ingredients spawned naturally in a world.

Source: Bone Meal (crafting) and Lily of the Valley (crafting)

Quasi-Primary dyes are able to be created from a single ingredient spawned naturally in a world or by combining the other dyes.

Secondary dyes are made by mixing primary dyes together.

Aside from those primary, quasi-primary, and secondary dyes, there are also some old ones. Here are those old dyes:

Dyes are able to be used to re-color a lot of items, blocks, and mobs, such as balloon, banners, beds, concrete powder, the collar of a tamed wolf or cat, firework star, leather armor, wool (not when placed), shulker boxes, signs, stained glass, and terracotta (converts into glazed terracotta).

A few dyes such as white dye is also a required material when crafting the other dyes. Depending on the object, dyeing is achieved by either placing the dye in a crafting table along with the other materials or by right clicking on the target while the dye is held.

Talking about crafting dyes, apparently, the dye ingredients are able to be found from a wide variety of sources. There are some procedures used in the production of dye, depending on the color. A crafting table may be needed to combine ingredients, others may be ground up without one, and some may need to be baked in a furnace first.