When you are playing Minecraft, can you differentiate between dropper and dispenser? They seem almost similar but actually they have some differences. So, you need to know the difference between them so that you are able to use them correctly in the game.

Dropper is block which is able to be used to eject items or to push items into another container. You are able to obtain it from block loot or crafting it. If you obtain it from block loot, you are able to mine it by using any type of pickaxe. If you mine it without using a pickaxe, then they drop nothing. If you want to obtain it by crafting it, you need to know the recipe of it. The materials that you need for crafting a dropper is 7 cobblestones and 1 redstone. 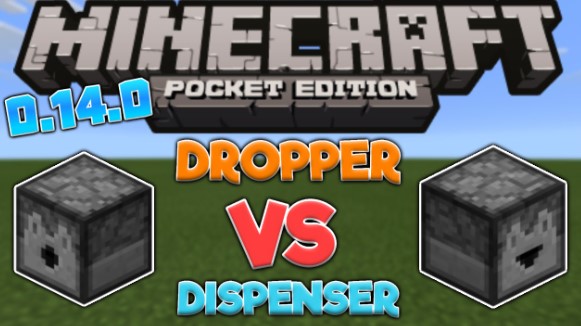 A dispenser is a solid block in Minecraft. It can be used as a redstone component to dispense items. You are able to obtain it by mining it with a pickaxe in which case it drops itself and its content. If you mine it without a pickaxe, it drops only its contents. You are also able to craft it and the materials needed are 7 cobblestones, a bow and a redstone dust. The recipe is:

The dropper spits out all items as entities, but dispenser shoots out some as projectiles or otherwise. However, they are the same in many ways such as placing behaviour. In some cases, dropper is useful over dispenser since they drop items that dispensers would shoot out as entities. Dropper is not able to activate items but dispenser can shoot arrows placed in it, place down shulker boxes, place down water/ lava source blocks, equip armor on a player, set off fireworks, set off TNT, place boats in water and apply bone meal to crops. Dropper will only dispense items which are put in it in their item forms and it will never activate anything placed in it.

There are some videos that you can watch to help you more understand about the difference between dropper and dispenser.

How to Use a Command Block in Minecraft

How to Make an Observer in Minecraft