Dragon Mounts 2 has the purpose to make once useless dragon eggs useful, and making the once amazing Dragon Mounts addon even better. This one adds 22 new dragons, 3 custom items, 14 new swords, 4 biomes, and cannons. It took a very long time to make so the creator would appreciate it if no one uses any code or textures, or models from this addon.

Almost all dragons will be spawn in different locations, will have unique health levels, different breathing and behavior. Aside from that, addon also adds the boss dragon which is known as The King of the Dragon. Feel free to take the challenge and try to kill him, if you win you will get good loot. 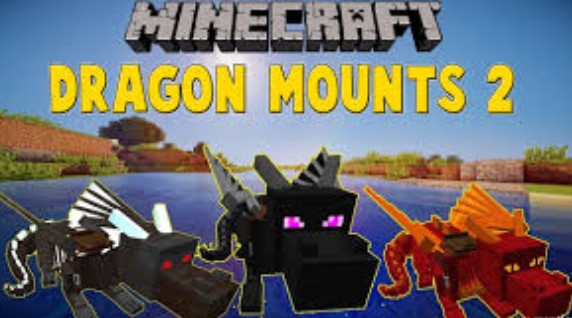 The King of The Dragons

Not much is known about The King of The Dragons. It is popular for annihilating whole biomes on its own, and eradicating villages. It can breathe explosive versions of ender dragon breath, and can easily kill the strongest tamable dragon or the atmosphere dragon. This one has been spotted in all 4 special biomes. If you are going to try to slay this monster, you are better to build a fort out of something that cannot be blown up.

All dragons with the exception of the special dragons, can be bred. Breed a male variant with a female one and you get an egg.

Cannon spawn in villages and are a defense system against dragons. Villagers are able to ride cannons. Do not forget to bring your dragon to a village or it has a chance of being blown up.

How do you tame the dragons? You are able to tame all dragons with salmon. You will be allowed to put the saddle on the dragon, dragonarmor and chest. All that you have to do is to click the crouch and sit button and the dragon will sit.

How do you breed the dragons? Most of the dragons (without a special one) are able to be bred. You can just take a woman and man so they can make the egg.