The game named Minecraft is by far one of the most amazing games and also the most well-known game ever. There is a massive amount of fan following for the game and it just keeps getting popular, the game added a feature called Minecraft Cartography table. Which we will talk about in this article, people know the Minecraft games are all about exploring and building your own world as you want. While you are also able to invite the other people to visit the artwork you made.

What is the thing called the Minecraft Cartography table? Basically, Minecraft Cartography table is a block that is used to explore, lock, zoom out, and to clone the map. This kind of table is usually found in villages in a cartographer house and is able to be obtained by the hands of the players or anything. Even though obtaining by mining with an axe is clearly a quicker way. It is used with the help of some recipes that allow you clone, zoom, explore, create and lock maps. 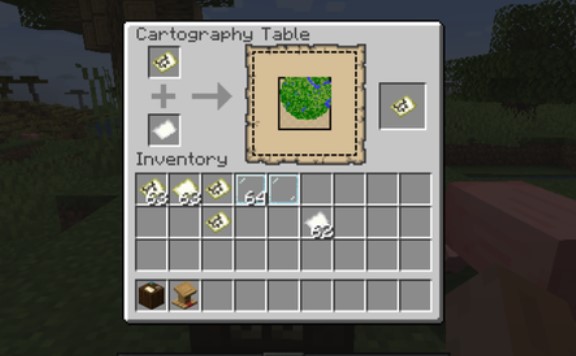 Before when you wanted to resize a map you needed to mix 8 paper, but in the thing known as Minecraft Cartography table now you just have to put the map in a slot and put a paper in the second slot and combine them in order to get the bigger map. You are able to see the preview of that in the middle of the screen as you combine them. You are able to resize the map to make it bigger up to four times, meaning you will have a bigger space to explore.

Once you are done you are able to explore the map and you will see that map extending as you move more and explore it, in case you do not want your map to get messed up and generate new things. You can lock it, for locking the map in the Minecraft Cartography table you are able to use a recipe that mixes your map and glass pane that will lock your map.

Now you are able to explore as much as you want and your map will not be generating anything new. Aside from that, it will never generate again. That is the thing about it once it is locked forever.