Fire charge can be described as the item that was added to the game called Minecraft in update 1.2.1 alongside jungle biomes, iron golems, and redstone lamps. When right clicked, the selected block will burn, even if it cannot be flamed, it is like flint and steel in a way. This one may also be shot from a dispenser, in which case it acts like a blaze fireball, flying in the straight line with random aim and placing fire to any block or entity it hits.

Compared to flint and steel, fire charges are able to be renewed, but they need the player to gather its most important ingredient called the blaze powder, which can only be obtained by killing blazes. Apart from that, gunpowder is also needed to make this item. In addition, the coal or charcoal is also required to craft a fire charge. 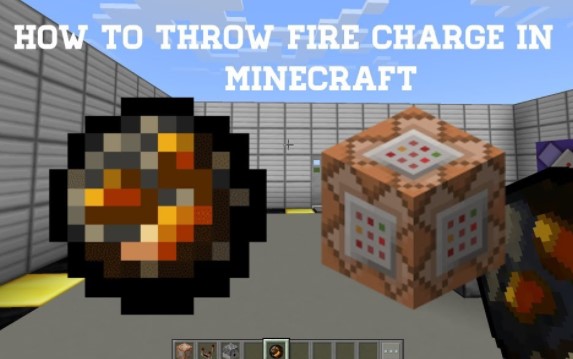 Some people are wondering if they can throw fire charges in Minecraft. If you are also wondering the same thing, please keep reading the article to find out the answer to the question.

Apparently, players cannot throw fire charges in Minecraft, while blazes can. Blaze refers to an uncommon mob with yellow-colored skin and black eyes. They appeared for the first time in the Beta 1.9 Pre-release 1 version. They are hostile mobs who are located within the Nether. When they see a player, they will set themselves on fire, which does not damage them, and they will then shoot a 3 round-burst kind of fireball attacks at a player. They guard Nether Fortresses and are normally spawned from a monster spawner, but are able to be found roaming Nether Fortresses. They are able to be recognized easily as a collection of blaze rods, which can help the player notice a blaze before they are noticed. Since a blaze is on fire, and the fire is extinguished by the water, blazes are the only ones that are able to be killed with snowballs. 0 to 1 blaze rods are dropped when killed. They have two attacks. When the player is near, the blaze hits them for about 2 hearts of damage. If the blaze has spotted them, but they are too far, the blaze will shoot a fireball at them, which ignites on impact.

Even though blazes are able to fly, they will stay on the ground or sink down slowly in the air when not attacking. They will try to swim upwards in lava, much like regular mobs behave in water. When they see someone, they will begin flying and shooting. They have the ability to catch the fire briefly. A short reload period happens between attacks.

In addition to the normal weapons, blazes are able to hurt by snowballs, taking 3 damage per hit. If they discover a way into the Overworld, they are also damaged by water and even rain. Apparently, water does roughly 1 damage each second. Just like all Nether mobs, they are not damaged by fire or lava.