Brown Bricks is a catchphrase made by Cinemassacre and Mike Matei during a video in which Mike Matei and an animated incarnation of the character Inspector Gadget review the IOS port of famous sandbox game called  Minecraft.

That video displays Mike performing double duties, portraying himself as well as giving the voice of Inspector Gadget. Unfortunately, his performance was met with negative reception from fans of the site. Even, in May of 2017, it became a famous reference for remix channel SiivaGunner. 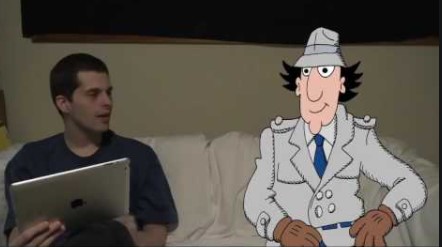 Mike Matei uploaded “Minecraft with Gadget,” a video in which he and an animated incarnation of the character Inspector Gadget, voiced by Mike Matei, reviewed the IOS port of Minecraft on May 11th, 2012. In that video, the Inspector Gadget has trouble pronouncing the name of the game, calling it “Minecrap.” Even, he repeated the name several times during the video, repeating “I love to build brown bricks with mine crap.”

Apparently, the video was quickly ridiculed and parodied online after its release. On June 5th, 2012, there is a YouTube user ‘getreadyforthecircuis’ uploaded a little edited version of the video entitled “The Reaction Mike Matei Expected from “MineCraft with Gadget” where a laugh track plays after every Mike’s failed jokes. As of May 17th, 2017, the video edit has over 44,000 views on YouTube.

In late 2016 and early 2017, some renditions started appearing on YouTube. The meme’s sudden revival in popularity may be due to its frequent use in media surrounding Iris animator Chris O’Neil who can be heard quoting or referencing it. It became a famous meme amongst of the channel’s fans.

In May of 2017, Siivagunner started referencing the clip in their own videos. On May 14th, they uploaded “Main Theme – Inspector Gadget: Mad Robots Invasion,” getting over 19,000 views. Later, on May 17th, Siivagunner uploaded a parody of the Angry Video Game Nerd intro by using the clip.

Well, the text above is an explanation related to Brown Bricks. In addition, we are also share some information regarding Inspector Gadget. Just continue to reading the text below.

Originally, the character’s memetic popular from a video of James Rolfe and Mike Matei of Cinemassacre reviewing the “DIC’s Easy Play” feature on a DVD for the Super Mario Bros. Super Show! This feature consists in a lengthy explanation done by Inspector Gadget aimed to instruct younger audiences on how to operate a DVD player.