In real life, Axolotl is also known as the Mexican walking fish. This creature is a neotenic salamander which is related to the tiger salamander. Even though it is known as a walking fish, but actually it is not a fish. So, what is it? It is an amphibian.

This creature has three red coral like protrusions on its head on each side. If you have seen this creature, you may think that it is unique. As a Minecraft player, you may hope that this creature can be found in the game. Even a Minecraft player shares his idea about the addition of axolotl in Minecraft. His idea about axolotl in Minecraft is that we would be able to tame it with a cod, and when tamed, it could scare away drowned and pufferfish. In addition, he also states that it would have half the health of a player. Then, another special thing about the mob is that it would be able to regenerate 1.5 times faster than any other mob. For the size, it may have 1 block long, half a block tall, and a block wide and it would spawn in warm ocean caves. He also states that this idea was inspired by the coral crafters build. 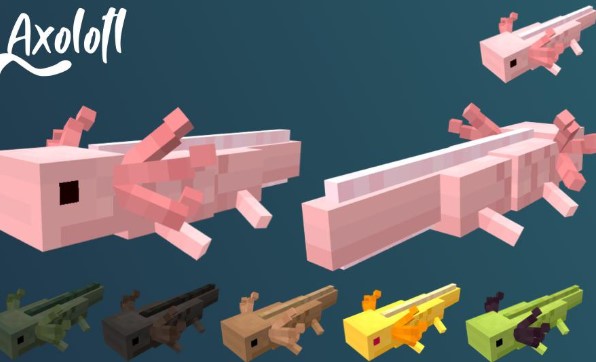 Now, is it possible for us to make this creature exist in the Minecraft game by using a mod? In the Mcreator site, you are able to find Ambystoma’s Axolotls mod. It is a mod about axolotls and it is going to start off very basic. This mod will stay as 1.12.2 for now and the developer will improve on the axolotl models, axolotl textures, adding new axolotl-themed items, more animations for the axolotls, the performance of the game, some sounds and gameplay features. So now, this mod is still in development. However, you are able to download it on MCreator site.

If you go to the CurseForge site, you will be able to find a mod named Natural Fauna Mod: A ZAWA addon. This mod has been downloaded more than 123k times and when this article was being created, the last update of the mods was on March 22nd, 2020.

In the description of this mod, the final animal list of this mod are so many and one of them is Axolotl. So, you will be able to see Axolotl by using this mod in the Minecraft game. The other animals that you can see are African cheetah, American paddlefish, Blue gnu, Bushbuck, Camel, Common avocet, Estuary stingray, Grey seal, Kori bustard, Puma, Marmoset, Saddlebill stork, Spotted hyena, Violet turaco, Xenopus frog and many more.

Unfortunately, this mod will no longer be receiving updates. And also it will not work alongside ZAWA 2.1 or future versions. If you are updating ZAWA to 2.1 or newer, you need to delete this mod.

Well, that’s all the information that we are able to give to you about Axolotl Minecraft mod. You are able to use it if you want to be able to see axolotl in the Minecraft game.